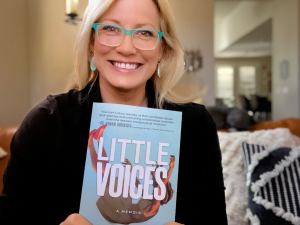 Kiersten Hathcock calls herself an ordinary mom who was making children’s furniture in her garage while her kids were in school. But most people who hear her story would likely agree, what’s happened to her in the past decade or so is anything but ordinary, as Hathcock has ventured into the world of celebrity, the paranormal and unsolved mysteries. Her book, “Little Voices: How Kids in Spirit Helped a Reluctant Medium Escape and Heal from Abuse,” is being released this month and launching her on a book tour that starts in Northern Arizona.

“I would say the book will help my furniture brand on a level that’s not measured in sales,” she said. “And I’m totally OK with that and happy about it. What I’m doing and talking about goes beyond anything I can quantify. When I speak to high school kids all over the country, almost every time, at least one student will come up afterward and say, ‘Thank you. I went through something similar and I’m struggling.’ For me, it’s about being a voice for kids and adults everywhere who can’t talk about hidden abuse they endured.”

Hathcock is talking about child abuse. “Little Voices” is a captivating memoir about her journey when suddenly, at age 36, she started seeing and hearing spirits of deceased children, some of whom were killed by predators. Her intuitive awakening led to quiet partnerships with detectives around the country as they sought her help to solve crimes.

“I wrote ‘Little Voices’ to help skeptics and domestic violence survivors open themselves to the possibility that intuition is real and can be lifesaving,” she said. “I hope that if people can use their intuitive gifts, they can heal old wounds and create the life they want to live.”

As Hathcock, a self-taught carpenter, was sawing and sanding pieces of wood into mid-century modern furniture, like stylish table sets and toy chests with colorful cutouts that lift so toys can be neatly tucked away, spirits of deceased children began coming into her life. It started in 2011.

“As a skeptic and believer in scientific data, I couldn’t wrap my head around what was happening. I thought maybe I’d inhaled too much polyurethane in the workshop.”

Meanwhile, she was building a solid foundation for her business, Mod Mom Furniture. Hathcock took her concept and brand to the television program “Shark Tank” and successfully made the pitch. Living in Los Angeles at the time, celebrities became her clientele. Through the program and reruns, she gained more visibility and sales. She was busy building and selling. Eventually, she began a collaboration with the Frank Lloyd Wright Foundation and leading toddler furniture maker Little Colorado, a partnership that continues today.

But the children kept coming. Many, who had been killed by predators or had died suddenly, would communicate to her about their tragic deaths. She thought she was losing her mind until she started sharing what she was receiving with law enforcement and grieving parents who validated the messages as accurate.

“It’s incredibly emotional work, so I had to learn to step outside of myself and just record what I was seeing and hearing. I became like a doctor observing a patient and would write down what I was being told that needed to be shared,” she said.

Hathcock became an undercover medium, volunteering to help police officers and detectives solve crimes against children. “After I’d been volunteering for about two years, visions of myself at a young age started coming to me. Because I trusted my intuition by that point, I knew to trust what I was getting.”

Long locked-out memories began to reveal themselves to her. She learned that she, too, had her own history with a pedophile, repeated assaults by a distant relative from the time she was 3 until she was 6. “The grooming started at age 3.”

Further, during a three-year split from her husband, Scott, she “fell down a deep hole,” she says, into a relationship with a narcissistic sociopath. “Unbeknownst to me, I was living with a predator.”

Hathcock believes the spirits of the children were warning her. One, named Jason, told her to “go get the restraining order now. You have to do it now.” Recalling that chaotic time, she says, “If it weren’t for the kids in spirit helping me escape the abuse, I believe I would be dead. It was unbelievably full circle to realize that the kids weren’t simply coming to me for help, they were coming to save my life.”

Retired New York City Police Department Detective Mark Pucci, who continues to work as a private investigator, has collaborated with Hathcock on cases. He says her psychic ability “literally” saved his life when she warned him that he was putting himself in “mortal danger” with individuals connected to an investigation. Clues she was able to provide him helped him recognize the scene where danger lurked and also the individual who had intended to harm him. “Without any doubt, if Kiersten hadn’t advised me of the message she had received, and the specific details it contained, I believe the outcome of that afternoon could have been very different.”

Det. Pucci says Hathcock’s involvement often leads to a unique take on an ongoing investigation. “What Kiersten’s abilities bring to the table is oftentimes a focused message, which may cause a re-examination or re-evaluation of current evidence, a fresh perspective or nuance you may have overlooked before or may also initiate the creation of a new direction entirely to explore.”

Currently, Hathcock and Detective Pucci are starting a non-profit organization, The National Institute for Law and Justice, to provide management of investigative services for crime victims and their families who are searching for answers, resolution and closure – at no cost to them.

Detective Pucci will be joining Hathcock at a book signing at 6 p.m., Thursday, Sept. 22, at Brightside Bookshop in downtown Flagstaff. “Little Voices” is published by Post Hill Press and distributed through Simon and Schuster. For more information about the event and to purchase tickets, visit https://www.kierstenhathcock.com/book-tour.html. FBN