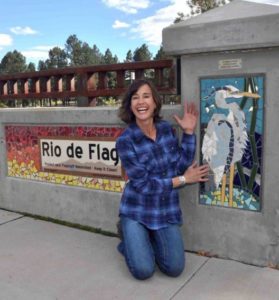 How do porcelain and ceramic tiles, mirrors and glass gems make an image?

In the creative mind of mosaic artist Karen Knorowski of Flagstaff, with a tack hammer, tile nippers and glasscutters, these materials can be crafted into miraculous scenes.

With deliberate and specific cuts and hands protected by gloves, Knorowski has fashioned a unique and stunning work of public art in the form of mosaic panels lining the sides of the North Thorpe Road Bridge that spans the Rio de Flag just past the Francis Short Pond.

“I put my heart and soul into it, “ she said. “Art and nature are my two passions. It’s really important to me to integrate art and nature and part of that integration is to be outside.’”

Titled the Rainbow de Rio Mosaic Project, Knorowski, 47, launched the mosaic series on her own initiative three years ago in celebration of the plants and animals of the Rio de Flag and this watershed area.

“In May 2015, I was walking along the urban trail with my dog, Daisy, and I discovered an incredible blank canvas for mosaics on the bridge that crosses the Rio de Flag on Thorpe Road,” Knorowski explained. “I started to imagine creating many mosaics that would span the length of the bridge, and not long after that day, I approached the city and asked for permission to create the mosaics. I was given the green light and started the project in September 2015.”

Fundraising was a challenge, but the artist was awarded a $2,500 Beautification-in-Action grant for the project, which supplied the financial backbone to begin work.

“Not only did I receive sufficient funds, I was inundated with people who were eager to help build the mosaics,” Knorowski recalled. “I had so much fun working with the many folks who helped with construction of the project. Funding came by way of many different sources, large and small, and I am filled with gratitude for the support of our community. “

The series of 22 individual panels features local plants and animals, as well as two special Hopi kachinas, the corn maiden and the snow maiden.

The final mosaic is a greater short-horned lizard that the artist completed in April of this year with the help of Billy Cordasco, a resident of Flagstaff who became her husband in an outdoor ceremony last month.

“I used thinset mortar to apply the materials, and I grouted with sanded grout,” she said. “I will seal the grout every year or two.”

Although available materials were limited, tiles for the project came from Daltile in Flagstaff and from Nick Lipinski, who both sold and gave Knorowski many of the tiles that are in the artwork on the bridge.

Mosaic, the art of creating images with an assemblage of small pieces of colored glass, stone and other materials, has a long tradition dating back to ancient Mesopotamia and classical times in Greece and Rome.

Knorowski, a native Arizonan who was born and raised in Phoenix, fell in love with the mosaic form in 2009 after attending the Institute of Mosaic Art in Berkeley, California.

“The overall theme of the project is a celebration of the biodiversity of our area, and I allowed the project to grow over time, sometimes, in a way, designing itself,” she explained. “The first critter to grace the bridge was the great blue heron because I saw one fly overhead while I was deciding what should be first. Later, I decided to include a jackrabbit because I was surprised early one morning to see one hopping near the pond.”

Knorowski, who also is an accomplished plein air watercolor painter, said she chose the colors of her mosaic palette to best reflect the natural area near the bridge, “sometimes, including a whimsical flair to make the artwork festive and uplifting.”

Another challenge was the weather.

“As we know, weather has a mind of its own, but the community was immensely supportive, encouraging and generous, and they are the reason the mosaic exists.”

Knorowski, who earned a Bachelor’s of Fine Arts from Northern Arizona University and worked as a naturalist in national parks in the past, said that the Hopi culture has deeply influenced her art. She lived in Hotevilla on Third Mesa for nine years, where she taught K-8 art.

“That is where I, along with my students and many volunteers over the course of three years, constructed my first large scale outdoor mosaic,” she noted. “It is 40 feet long and 14 feet high and is on the front of the school building. The innate aesthetic senses of the children, which are infused into them through their rich cultural traditions, are incredibly inspiring, and the landscape has such a subtle yet profound beauty that they seemed to pour out of me in a variety of creative ways. I deeply treasure the chapter of my life that I spent on the Hopi Reservation, and I carry all those experiences with me around in my heart and I love to share stories of my time there.”

In fact, at the start of her mosaic bridge project, she taught an after-school mosaic club at Hotevilla Bacavi Community School, where students helped construct the mallard ducks and the redwing blackbirds that appear in some panels. In addition, a student at one of her summer camps at “The Hopi School” in Hotevilla built the corn maiden that is prominently displayed on the bridge.

Knorowski left the Hopi Reservation two years ago to live full-time in Flagstaff.

“I miss Hopi, but my chapter there was complete,” she said. “I am just really happy to be back in Flagstaff.”

Some of the mosaic critters on the bridge were created by participants in two paid workshops Knorowski taught at Willow Bend Environmental Education Center in Flagstaff.

“After that, I utilized some high school students who earned community service hours for their own projects, family, friends and volunteers,” she said. “Some volunteers introduced themselves as they walked by and expressed interest; others I found on Facebook and through word of mouth. It was a true community project.”

Knorowski, who describes herself as entrepreneurial, creative, with a good imagination and “pretty independent,” manages to piece together her livelihood today, working as a weekend caregiver, teaching workshops in watercolor, mosaic and journaling and giving private art lessons.

She recently completed a mosaic for the Museum of Northern Arizona. With the theme of bio-cultural diversity, it is rendered in turquoise and black and white, with touches of mirror and depicts the Hopi rain cloud, corn, antelope, a quail, heron, flower and lizard.

The work was requested and funded by Gary Alpert, a retired Harvard professor who is a research associate and director of the center at MNA.

“Karen’s outdoor mosaic art has been extremely well received here at the MNA,” Alpert said. “This mosaic celebrates Native American cultures on the Colorado Plateau. The mosaic is installed just outside the entrance to the Center for Bio-Cultural Diversity on the Harold S. Colton Research Center. Several guided walking groups have visited the mosaic and it is a common theme for individuals to figure out the cultural meaning associated with each panel.”

Katie Fix was hired by Knorowski to help with the MNA mosaic.

“She’s a responsible and creative senior at Flagstaff High School, and she did a wonderful job helping to build the museum mosaic here in my kitchen, prior to affixing it to the building at MNA,” she said.

Knorowski, who was nominated in 2017 for a Viola Award in Visual Arts, is busy with future projects.

“I’m working on putting together a book of watercolor paintings,” she said. “My focus right now is local birds, which branches off from the mosaic project on the bridge.” FBN