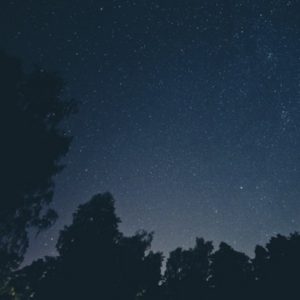 Jeff Hall stepped outside around 9:30 p.m., after attending a talk in Los Angeles a few years ago. As one would expect of an astronomer and the director of Lowell Observatory, his eyes went to the heavens. “The faintest thing I could see were the three bright stars in Orion’s Belt. You could maybe see 50 or 100 stars in the sky. If you are living in L.A., you don’t have a prayer to see the Milky Way.”

Hall wonders how generations growing up in large cities will be impacted without a connection to the cosmos. “Humans have pondered the Universe since our earliest ancestors walked the Earth a couple million years ago.”

Research shows urban glow is turning down our view of the night sky, but without a reference, many have no idea. Flagstaff Star Party organizers hear statements of awe time and time again. “I can’t believe how many stars you can see here!” is a typical comment from visitors to Buffalo Park during a public telescope viewing event.

Light pollution is the problem, says Hall, and dark skies are at risk as sodium lights have become obsolete for city streets and highways. “LEDs are a revolution in lighting technology and it’s understandable why everybody wants to switch to them. It makes a lot of sense to adopt this new technology: you can point them, dim them, shield them, set them on timers to turn off and on when needed, or use motion sensors.”

As communities replace sodium lights, the default is to use very bright white LED lighting, which has a blue-rich spectrum, says Hall. “This is one reason why they look so glary to the light-adjusted eye. White LEDs of almost any flavor will increase sky glow, lumen for lumen, by a factor of two at least over current widely-used lighting systems.”

With this widespread trend of turning to bright white light, Hall says now is the time to get the message out. He advocates for informing residents and builders about lighting options before they get to Flagstaff.

“The Flagstaff street lighting solution will be to use narrow band amber (NBA) LEDs as the new standard. However, we will also be using some phosphor-converted amber (PCA) LEDs,” he said. “PCAs are not as good for dark skies as NBA, but they’re not too bad – basically equivalent in sky glow impact to high-pressure sodium lights. The newest PCA LEDs are also almost as efficient as white LEDs and definitely worth consideration in any community, whether or not it has a 70-year dark sky tradition like Flagstaff.”

Hall also advocates for home improvement stores to feature dark-sky lighting sections. “It’s best if customers can just know that if you get something from this aisle, you’re good. We want to make it easy for everyone to follow the standards. The easier it is, the more likely people are going to do it.”

One concern that Hall commonly addresses is the question about how much lighting is needed for public safety, noting that lights that are too bright can blind individuals to what is in the darkness beyond. “No light at all is less safe, but having too much light is also unsafe if it’s over-lit and glary. There is a sweet spot,” he said. “We need to illuminate properly and not over-light at night. If you have a good dark sky ordinance in place, you often end up lighting the ground better. The lighting is shielded and focused.”

Certainly, dark skies are necessary for astronomical studies, but Hall is quick to point out that their value goes beyond space exploration. For example, research shows light pollution and the disruption of the natural day/night cycle are harmful to human health and wildlife.

As a thought experiment, he likes to imagine flipping a magic switch that could turn down all lighting by 15%. “No one would notice because of the way the eye works. It would still look perfectly illuminated compared to what we have now. Life would go on as usual. I have to assume if various utility bills went down by 15% in cities, it might not be a bad thing. What if these savings were put into education or roads?”

This month, as Flagstaff celebrates the 19th anniversary of becoming the world’s first “International Dark Sky City,” a designation awarded by the International Dark-Sky Association (IDA), Hall emphasizes that awareness and education are requirements of maintaining the dark-sky status.

As Lowell Observatory continues to build its new Astronomy Discovery Center, scheduled to open in spring 2023, educational exhibits will feature dark skies. “As you enter the dark adaptation area, we will gradually lower the lights. There will be dark sky examples of good and bad outdoor lighting so people can see the difference. We would love to have the lighting demonstrate things that people can implement when they leave and go home.”

Despite the challenges of the pandemic, Lowell Observatory has continued to stay connected to the public while connecting the public to the Universe through remote/live telescope viewing opportunities and virtual presentations. In addition, Lowell has been instrumental in making dark sky activities available to the public for free through the Flagstaff Star Party and Celebration of the Night. For information about activities continuing through October, visit FlagstaffStarParty.org.