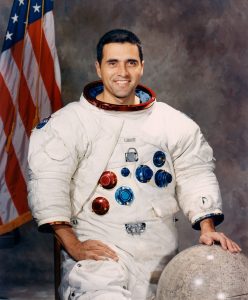 “I am very honored,” he said. “I never expected to do anything like this. I appreciate so much to be honored in this way.”

Monday, July 4 will see the return of Flagstaff’s annual Fourth of July parade. Serving as grand marshal will be Moon-walking legend Harrison Schmitt, who 50 years ago became the 12th and second to last person to walk on the Moon.

Dr. Harrison “Jack” Schmitt is a trained geologist who has spent most of his life serving the United States in one capacity or another. He is perhaps most famous for flying to the Moon in 1972, with Gene Cernan and Ron Evans, as part of the Apollo 17 mission. He became the only geologist – as well as the only astronaut without a background in military aviation – to walk on the lunar surface, and is one of only four moonwalkers still alive.

After leaving the astronaut corps, Schmitt served as a U.S. Senator from New Mexico, an adjunct professor in the Department of Engineering Physics at the University of Wisconsin, and a private consultant on topics ranging from geology and space to business and public policy.

No stranger to Flagstaff, Schmitt lived here in the mid-1960s. After earning a Ph.D. in geology from Harvard University in 1964, he took a job with Gene Shoemaker at the Astrogeology Branch of the U.S. Geological Survey (USGS) in Flagstaff. He helped to develop geological procedures that astronauts would eventually use to explore the Moon, but his tenure at the USGS proved to be short-lived; less than two years later, he was selected to be an astronaut himself, as a member of NASA’s first scientist-astronaut group. In fact, Schmidt said in a Flagstaff news briefing that he felt badly about leaving and talked it over with his supervisor, Shoemaker, who reportedly told him he’d be crazy not to jump at the opportunity.

As an astronaut, Schmitt returned to Northern Arizona for mission training and post-mission briefings. He retired from NASA in 1975 and has since visited Flagstaff on multiple occasions. Despite this connection to the community, he was surprised to be asked to serve as the parade’s grand marshal. “I am very honored,” he said. “I never expected to do anything like this. I appreciate so much to be honored in this way.”

The Greater Flagstaff Chamber of Commerce, in partnership with Nackard Pepsi, hosts the Fourth of July. The Chamber worked with Lowell Observatory to bring in Schmitt as grand marshal. “We are honored to have a parade grand marshal with such high distinctions as Jack Schmitt and we are excited to welcome Grand Marshal Schmitt in Flagstaff,” said Chamber President and CEO Julie Pastrick.

Schmitt said he looks forward to returning to Flagstaff. “It will be wonderful to be there and to see old friends,” he said, “and to think about those who are no longer with us, who contributed so much not only to our country, but also to the history and the dynamics of Flagstaff.” FBN

Flagstaff’s Fourth of July parade will begin at 9 a.m., Monday July 4. It will follow the traditional downtown course of past years.

Other key sponsors of the event include Flagstaff’s Great Circle Media, Waste Management and APS.

For more information about the parade, contact the Greater Flagstaff Chamber of Commerce at 928-774-4505 or visit flagstaffchamber.com.