You are here: Home / Columnists / More Gun Laws to Be Debated in the New Year 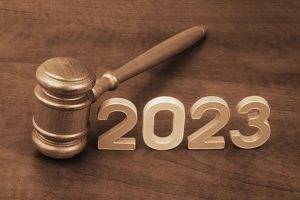 Let’s all commit to making 2023 the year we tell our elected representatives to stop wasting time and get to the root causes of this issue.

Through the past year, we’ve watched as the current administration has enacted many new laws. Some of them were aimed at reducing firearms violence (something we all support). Many of our elected representatives suggest that even more laws are needed and promise that banning specific inanimate objects will keep us safer. Will they?

Let’s first look at what has happened this last year. The Bipartisan Safer Communities Act, which was signed into law in June 2022, has many provisions, we’ll look at a few. The new law now treats anyone between 18 and 21 years of age as a different class of citizen. Only folks in that age bracket are now subject to additional background check screening. That screening takes additional time, so a side effect is that all background checks automatically result in a delay that can be extended for 13 days. Will this new law keep us safer? No one knows for sure, but we can safely say that a 20-year-old single mother that files an order of protection against an abusive boyfriend will now have to wait an extended period of time before they can purchase a firearm for protection. Yet, if she were just a year older, it’s likely her background check would be approved in minutes and a sale could proceed. Is this new law keeping that mother safer?

Other provisions of the law are focused on more spending (with dollars we don’t have) on programs lawmakers hope will reduce firearms violence. It allocates $750 million for use in passing Red Flag laws in more states. One could ask, did the founders of our great nation intend that the federal government would be spending nearly a billion dollars lobbying states to pass laws? Didn’t they believe that states should have autonomy from federal intervention and be allowed to mostly govern themselves? If it’s OK that the federal government is now in the business of lobbying, what other issues should they be supporting or opposing at the state level? While Red Flag laws have seen mixed results in practice, shouldn’t we leave it to the voters of each state to determine if and how to implement them? As dependence on federal funding for many programs such as education has increased, the control of the federal government has continued to increase. Oftentimes, that control is wielded not by elected representatives but instead, career bureaucrats.

One area the bill addresses that likely needs much more attention and funding is community mental health programs. One of the many crises we’re facing in this country right now is a lack of accessible mental health resources for those who need them. Tragic events like Sandy Hook are not a result of too few gun laws but instead, are clearly a failure of our mental health system. We must have ways to help those suffering from severe mental illness that will keep both them and the public safe. Hopefully, some of this funding will be used for programs that will accomplish these goals.

Looking into the new year, we hear demands for bans on specific kinds of firearms and magazines from the politicians we’ve elected to represent us. They suggest that if we would just ban this or that, the perpetrators of this violence would no longer be violent. At best, that thinking is naïve. The No. 1 enemy on these folks’ list seems to be the AR-15, or Modern Sporting Rifle. The latest estimates suggest there are more than 30 million variations of this rifle in circulation today. Despite that popularity, rifles of all types (which the MSR is a subset of) are only used in less than 3% of firearms homicides. If we were to successfully ban the future sale of and eliminate all 30 million MSRs, does anyone believe that the perpetrators of violence would not just choose a different tool?

The solution to firearms violence in our country requires identification of the root cause, not the method used. We need to understand what motives the violence in the first place and eliminate those causes.   There are more than 22,000 firearms-related laws in place today; they are clearly not accomplishing the desired result so additional laws and bans won’t succeed. Let’s all commit to making 2023 the year we tell our elected representatives to stop wasting time and get to the root causes of this issue. FBN

Rob Wilson is the owner (with his wife, Elise) of Timberline Firearms & Training in Flagstaff. They offer a full line of firearms, accessories, safes and ammunition along with Liberty Safes. For more information, visit timberlinefirearms.us.