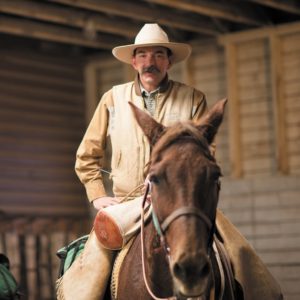 In the last century, history has painted illustrious stories about mules and the Grand Canyon, and surprisingly, according to John Berry, livery manager for Xanterra’s South Rim mule operation, not a whole lot has changed.

“That’s what I really like about my job,” said Berry. “Living in this high-tech, fast-paced society, I can ride a mule down to Phantom Ranch and feel like I’m stepping back 100 years in time.”

His office, which is located inside the Mule Barn on the South Rim of the Grand Canyon, reflects the year it was built: 1907.

Berry says the best part of his job is being in the outdoors and taking riders down to Phantom Ranch. “It’s such a wonderful experience and people are always amazed.”

Along with overseeing the daily Mule Rides into the South Rim of the Grand Canyon to Phantom Ranch and along the rim (Canyon Vista Rim Rides), Berry manages a staff of 23 wranglers and about 150 mules to get packs and riders in and out of the canyon. He’s also a farrier (person who shoes horses and mules), and repairs trails damaged by heavy rainstorms.

Berry is very concerned about his customers and their experiences. He reads the comment cards daily to make sure the operation is performing at its best.

Born in Phoenix, Berry grew up in Bishop, California, where his family owned two pack stations. “We would take people on backcountry horse/mule trips for a week or two at a time in the Nevada Sierra’s.”

His first job was scooping up manure around the yard. “I still have the same wheelbarrow,” he added.

In 1993 he started working at the Grand Canyon as a packer. He left for a few years and returned to fill the manager’s post four years ago.

One of his most memorable experiences riding into the Grand Canyon was on the South Kaibab Trail. “It was morning, before dawn, and I dropped off the rim into the canyon with a string of five pack mules. When I got to Mormon Flat, it was still dark and we had to stop to wait for a thunderstorm to pass. I watched the most amazing lighting storm going down the canyon right in front of me.”

About five million people visit the Grand Canyon each year. Around 3,500 people take the mule ride to Phantom Ranch. “It’s not like your pony ride at the county fair,” said Berry. “It can be a tough ride, but some have called it the best ride in the country.”

Recently, Berry had the honor of taking Oprah Winfrey for a short ride. “I think she really enjoyed it.” FBN

“My brother. He’s 10 years older than me and he was one of my role models as far as this line of work. He went blind eight years ago but he rode until he lost his sight. I’m trying to get him on a ride down to Phantom Ranch soon.”

What book would you recommend?

“Undaunted Courage” by Stephen E. Ambrose. It’s about the Lewis and Clark Expedition.”

What is your favorite restaurant?

“Anywhere in the Western states.”

What do you do to unwind?

“I love to go to the forest and cut firewood, camp, hunt and spend time with my wife.”