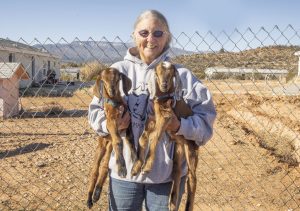 Her products are described as creamy, foamy, healing.

The age-old problem of eradicating deep-rooted weeds can be a real challenge, and finding solutions aren’t readily discovered via a Google search.

When Goat Milk, Etc. owner Nancy Sheffert faced the plight of stubborn weeds on her Cornville property, a neighbor’s uncanny suggestion led to a prosperous venture for the native Californian. “My neighbor’s solution was to get a goat. ‘A goat?’ I asked. I’m a California beach bum. I don’t even know what a goat looks like,” she said.

Within days, the kind neighbor pulled up in a truck and unloaded a goat and the weeds were eradicated. “The goat, named June Bug, turned out to be pregnant and had triplets, which is not unusual for Nubian goats,” said Sheffert. “Only one out of the three lived, so I named her Cocoa.”

Two years later, another neighbor suggested that she start breeding goats. “I knew absolutely nothing about breeding, but found a male goat on Craigslist, and five months later, Cocoa gave birth. That’s when I learned to milk Cocoa. I had no idea what to do with the milk until another neighbor – oh, how I love my wise neighbors! – suggested I drink it and make soap. The goat milk was absolutely delicious.”

It took a long time for Sheffert to figure out a recipe for soap and determine which oils would blend with the milk, but after six months of extensive research, she developed her own recipe. “I landed on a formula which yielded a very luxurious soap that lathers well.”

Moving onward in her venture, in 2008, Sheffert took her soap to market. “I attended the Cornville Business Showcase and sold 57 bars of soap,” she said. The comments from pleased customers came pouring in.

As the goat’s milk supply increased, so did Sheffert’s product list. “I added skin lotion, shampoos, facial cleansers and moisturizers, a foot cream that softens feet, deodorants and even an arthritis lotion that alleviates the pain and stiffness of arthritis.”

Sheffert says she yields about a gallon of milk a day.

“I have a bar of Goat Milk, Etc. soap in my shower right now. It feels very natural and good for my skin,” said Flagstaff Resident Natalie McNall. “I also purchased some lotion and it moisturizes my skin wonderfully. It’s a great product.”

In her quest to have happy goats, which Sheffert says improves the quality of their milk, she decided to renovate the goats’ habitat and built a durable structure to withstand the hot Cornville temperatures. “I also expanded their enclosure so they have a free-range pasture.”

Increasing the quality of the feed was also important to Sheffert. “I started to feed the goats natural oats, alfalfa and molasses. Happier nanny goats give better milk, which produces better soap and lotions.”

“It was so sweet that she gave each of us a lotion here,” said FMC’s Sylvia Goldberg, RN, BSN. “It was a nice pick-me-up. The lotion makes my skin feel like silk and I love the scent.”

“The lotion is so rich you only have to apply it once a day, even in the hot and very dry Arizona climate,” said Sheffert. “Some of the women who have used my product claim it’s even helped reduce wrinkles.”

Sheffert’s family of goats has increased to 17. “Our herd has grown steadily each year as more nanny goats are adopted and more kids are born. I have 13 extremely pampered goats and a few goats who double as weed eaters.” Sheffert also sells baby goats.

Goat Milk, Etc. products can be purchased online and also found during the spring, summer and fall at various Farmers Markets and outdoor bazaars as well as Looky LuLu’s Antiques and Resale in Cottonwood.  Several years ago, she sold her first large order to a distributor in Spain and sells to a few stores in California, Oklahoma and Indiana.

“We are really excited about her product, especially the fact that it’s locally made. We are hoping she will consider selling her products here,” said Camp Verde Ruby Road owner Pamela Bridgnell. “Her molded soaps are really cute.”

I am inspired all the time. Deodorant was the last formula I created and that was about a year ago. I’m working on a sunscreen.

I really like summer because of the Munds Park Farmers Market.

ACTRESS WHO WILL PLAY ME

The movie, “Baby Boom,” played with Diane Keaton was my big inspiration. She bought this farm with all these apple trees and started making baby applesauce. I got this goat and when I started milking her I decided to use the milk to make products. I would have Diane Keaton play me.

LAST TIME I LAUGHED OUT LOUD

I laugh out loud all the time. I laugh when I spill milk, when I am actually feeding the babies and they are crawling all over me. I am sure my neighbors think I am crazy if they watch me with the goats. The babies probably think something is wrong with me.

ADVICE FOR MY YOUNGER SELF

I would say to have baby goats, as that keeps me young at heart. FBN

Photo by V. Ronnie Tierney, Fresh Focuses Photography: Nancy Sheffert says she likes to take care of her goats herself because they respond to her and she likes to have happy, contented goats.