Michael Vincent, Dean of the College of Arts and Letters at Northern Arizona is the 2015 recipient of the Juliana Yoder Friend of the Humanities Award, presented by Arizona Humanities. This award is given annually, and recognizes individuals, organizations or businesses that have made a lasting contribution to the cultural life of their communities through their active support of and involvement in promoting the humanities.

Dr. Michael Vincent, Dean of the NAU College of Arts and Letters, is a French Scholar focusing on seventeenth-century French Literature, with a special interest in La Fontaine.  During his thirty-five year career, Michael has worked tirelessly supporting Arts and Humanities education, and has introduced scholars and community members alike to the beauty and richness of French literature and culture.  Michael has been with the NAU College of Arts and Letters since 2006.

Prior to his arrival in Arizona, Michael was Vice President and Dean for the American University in Paris.  Vincent’s education includes University of Wisconsin-Madison, Universite’ de Paris-Sorbonne, Alliance Française Paris, and Saint John’s University, Collegeville, MN. 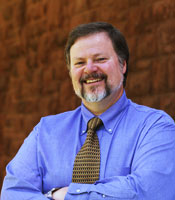 Arizona Humanities is an independent non-profit organization and the state affiliate of the National endowment for the Humanities. They support public programming in the humanities that promotes understanding of human thoughts, actions, creations, and values.  Since its foundation in 1973, nearly $11 million has been provided to cultural and educational institutions across Arizona.

For over 20 years the Arizona Humanities Awards have recognized community members and organizations that have made significant contributions to Arizona’s civic and cultural life through the humanities.  Brenda Thomson, Executive Director for Arizona Humanities announced, “These are the stars.  Their work has inspired Arizonans across the state.  Words that touch the soul, films that stir the heart, literature that deepens our knowledge of French culture and traditions, and theater performances that give voice to the homeless and incarcerated.  We could not ask for a more talented group to shine a light on the humanities.”

The public is invited to attend the awards celebration on Friday, November 13, 2015 from
4:30 – 7 p.m. at the picturesque North Mountain Visitor Center, 12950 N. 7th St., Phoenix, AZ  85022.  Marshall Shore, Arizona’s Hip Historian is the emcee and host for the evening.  The program will include a presentation by the Veterans Heritage Project, entertainment by spoken word artist Truth B. Told, and music with famed local jazz pianist Charles Lewis and his trio.  Guests will enjoy appetizers and beverages, and the opportunity to bid on wonderful silent auction gifts for the holidays.  Tickets are $40. Guests can RSVP atwww.azhumanities.org or call 602-257-0335.