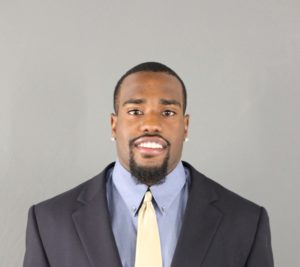 This year, the National Football League (NFL) celebrates its 100th anniversary. During this century of competition, more than 24,000 players have made NFL rosters and, according to pro-football-reference.com, 40 played college ball at Northern Arizona University. The most recent member of this Lumberjack club, Zach Bauman, followed a path to the NFL that started – and culminated – in Arizona. Along the way, he became one of the most successful players in NAU history and was inducted into NAU’S Athletics Hall of Fame earlier this year.

Born on July 24, 1992, in Chandler, football is in Zachary Jordan Bauman’s blood. His cousin, Greg Pruitt, was an All-American running back at the University of Oklahoma, twice a finalist for the Heisman Trophy. He was drafted by the Cleveland Browns and went on to play a dozen years in the NFL, earning All-Pro honors five times and winning a Super Bowl with the Los Angeles Raiders in 1984. Another cousin, Rashad Bauman, was a third-team All-American cornerback at the University of Oregon who went on to play two seasons in the NFL.

Bauman enjoyed a variety of sports, lettering in football, basketball and track at Hamilton High School in Chandler. But he really excelled in football, helping lead his team to consecutive state championships. In his senior year, he earned second team All-State honors as a running back, scoring 25 touchdowns and averaging a whopping 8.2 yards per carry. While these numbers dominated stat sheets, they didn’t impress major college football programs enough to offer Bauman a scholarship. So, he headed north on I-17 to NAU, where he would go on to become one of the most prolific players in Lumberjack history.

Bauman quickly established himself as NAU’s top running back in his freshman year and earned All-Big Sky Conference second-team honors while rushing for 1,050 yards. He topped that in his sophomore year, scoring 15 touchdowns and rushing for 1,425 yards. For his efforts, he was named to the All-Big Sky Conference first team for the first of three consecutive seasons. The following year, he again topped the 1,000-yard mark in rushing and was named a finalist for the Walter Payton Award, given annually to the top offensive player in the Football Championship Subdivision (FCS), the 124-team classification of college football in which NAU plays.

Bauman saved his best for last, rushing for 1,456 yards in his senior year while leading NAU to a 9-3 record and an invitation to play in the FCS playoffs. For his career, Bauman ran for 5,132 yards, one of several NAU records he holds. He also became the first player in school history – and only the ninth in FCS history – to rush for 1,000 yards in each of his four seasons.

Bauman followed his collegiate success with a brief stop in the NFL. His official NFL profile for the 2014 Draft gave him 5.02 grade (on this scale, a score between 5.01-5.19 means a “better-than-average chance to make an NFL roster”). While his listed weaknesses included “very average size” and “marginal acceleration,” his strengths included not only skills such as “very good balance” and “good ball security,” but also important personal attributes such as “extremely tough competitor,” “outstanding work ethic” and “excellent character.” He was ultimately not drafted, but the Arizona Cardinals signed Bauman to their practice squad, on which he played a couple of stints in 2014 and 2015. FBN