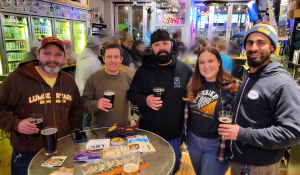 The release party for the Brew City Bock at Pay ‘N Take in historic downtown Flagstaff brought beermakers and craft beer fans together to mingle and talk Brew City Bock.

“We’ve known each other for years but never did anything together except for Flag 9 for Arizona Beer Week,” continued Jeff Fowler of Lumberyard. Flag 8/Flag 9, a citywide collaboration, is produced at a different Flagstaff brewery each year for Arizona Beer Week. The collaboration is named according to how many breweries participated that year. Fowler is a brewer by trade, but a knee injury temporarily sidelined him to the Lumberyard sales team.

“They are our brewery BFFs,” said Stephanie Henderson, director of craft consulting at Mother Road Brewing Company, about Lumberyard. “We’re so close we can throw a rock at each other.” Both craft breweries are located in historic buildings in Flagstaff’s Southside neighborhood.

“This town has a pretty close-knit brewing community,” said Lumberyard Head Brewer Gary Blazevich. “It’s all about camaraderie. First, we came together with the bock, a German winter beer, then we settled on the name.”

The craft beer is described as a classic German lager with a strong malt flavor and aroma. It has a deep amber color and features tasting notes of roasted malt, toffee and caramel.

“At Lumberyard, we like to brew in the pure tradition of the beer as we did here,” said Mike Dublin, a Lumberyard brewer. “The Brew City Bock is a German dark lager, smooth on the malt side. No herbs or flavors were added, just the malt and the yeast. The smooth flavor hides the alcohol,” he said, noting that there are two kinds of beer: lager, which is clearer and more carbonated, and ales, which are maltier and feel heavier because of residual sugars. Brew City Bock’s alcohol by volume (ABV) measures 7.8%.

Dublin added that the Brew City Bock is a classic single bock. “A doppelbock is bigger and harder to drink.”

The Brew City Bock was brewed and kegged at Lumberyard Brewing Company after weeks of planning and getting schedules aligned with the Mother Road team. “It’s a fun day at work, exchanging ideas and collaborating,” said Blazevich. “We even put the sales guys to work loading grains for us.”

Brewers hope to feature the Brew City Bock at the Strong Beer Festival on Feb. 18. The Arizona Craft Brewers Guild will hold the festival in Scottsdale as part of the 12th Annual Arizona Beer Week from Feb. 16 through February 26. Within 10 days, Arizona Beer Week celebrates craft beer throughout Arizona with over 300 events from Northern Arizona to Southern Arizona. FBN

Photo by Stacey Wittig: Ollie Sexton, Mike Devlin and Jeff Fowler of Lumberyard Brewery with Stephanie Henderson and Dylan Prater of Mother Road celebrate their Brew City Bock during the Pay ‘N Take release party. The craft brew is a classic German lager with a strong malt flavor and aroma. It has a deep amber color and features tasting notes of roasted malt, toffee and caramel.