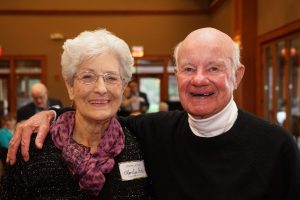 Northern Arizona lost a cherished community leader on Nov. 10, with the death of Northland Hospice founder Marilyn Pate, 82. Fittingly, Pate spent her last days at the Olivia White Hospice House, the end-of-life facility whose creation she championed two decades ago.

Pate began chiseling her Flagstaff legacy in 1982, when she gathered several like-minded individuals looking to meet the needs of terminally ill community members. The following year, the group started its first hospice care, operating out of Pate’s home under the name Hospice of Coconino.

The organization changed its name to Northland Hospice in 1984, incorporated and received tax exempt status in 1985, and in 1989 became the seventh hospice in Arizona to become licensed by the state’s Department of Health Services.

Spurring on this expansion was the indefatigable Pate, who Northland Hospice CEO Kathy Simmons called, “an incredible, caring, compassionate human being.”

From the beginning, Pate developed partners in the community who could help support Northland’s work, particularly important because it is a non-profit organization. Peggy Sheldon-Scurlock, bereavement counselor at Northland, says this collaborative mindset was a key component of Marilyn’s leadership. “Marilyn knew this was a service for the broader community,” said Sheldon-Scurlock. “She knew it couldn’t be done by herself or even by a small core of people, but rather that it was a community effort.”

These partnerships were critical to fulfilling one of Pate’s deepest desires. Northland’s initial work involved staff going to the homes of the terminally ill to help them, but this isn’t always practical for the ill and their families. Pate wanted a facility where they could go, and in 1997, she spearheaded efforts to make this a reality. Following a donation of land, Northland began fundraising for a facility to be named the Olivia White Hospice Home.

Pate also persuaded many community partners to donate time, effort and materials toward the effort of building the home. “Marilyn believed in her mission and vision [so much] that she made sure this happened,” said Simmons. “She was just so dynamic and could really inspire almost anyone. She lit a fire underneath a lot of people.”

Sheldon-Scurlock added, “Marilyn had a lot of clarity about her. She had a very determined persistence. She didn’t bowl you over with it but sat down with you and soon you saw that we needed to do this. She was a great communicator and she never lost sight of that collaborative focus.”

An important guiding principle that Pate insisted on was that the facility, like the rest of Northland’s programs, be open to anyone, regardless of their ability to pay. “There’s a beauty in the equalizing of that,” said Sheldon-Scurlock. We are all born, we all die, and the idea that they don’t have a [financial] hurdle to overcome at the end is gratifying.”

This openness to everyone continues today. “We don’t take people because they can pay, we take people who are in need of having a place to be,” said Simmons. For those who don’t have the financial means, expenses are covered by a wide variety of grants and donations to Northland Hospice.

Thanks to the vision of Marilyn Pate and the support of her beloved community partners, Northland Hospice has provided millions of dollars of service to thousands of terminally ill people and their families. “Marilyn really wanted to see that people were able to live the end of their lives the way they had lived the beginning of them,” said Gurley. Mission accomplished.

Pate is survived by her husband, William Pate, son and daughter-in-law Paul and Eva Pate, granddaughter and grandson-in-law Mindy and Sean Lee, and brother and sister-in-law Jerry and Trudy Velting. These and other family members and friends, as well as her cherished Olivia White Hospice House and its parent organization, ensure her legacy will be rich and long-lasting. FBN