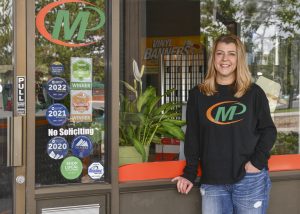 Returning to Flagstaff after graduating from Northern Arizona University (NAU) was a dream that came true for International Minute Press Owner Tracie Hansen.

“Soon after we finished school in 1993, my husband, Glenn, and I moved to Lacrosse, Wisconsin so he could go to grad school,” said Hansen. “After three years, we moved to Phoenix to be near family and I accepted a job at the Arizona Restaurant Association (ARA).”

Although she really loved the work she was doing, she and Glenn always felt that Flagstaff was their true home. On a whim, she applied for a job at NAU’s distance-learning program as part of the marketing team. “I got the job,” she said. “Glenn was working at Arizona State University (ASU) but we agreed that if it was meant to be, it would all work out.”

So he, too, spontaneously applied to NAU. Within six weeks, he accepted a position at the Honors College, where he continues to work to this day.

As her children were preparing to go to college, Hansen said she was ready for a change, but wasn’t sure what. At the same time, she learned that the owners of The Print Raven were considering retirement, and so gambling on her creative background and wheelhouse of skills in graphic design, publications, deadlines and budgets, she saw that things were starting to line up.

“It was a serendipitous opportunity, so I purchased the print shop in 2018,” said Hansen. “I had never owned a business, so I was well aware of what I had the capacity to do and where I would need help. So, we explored the idea of converting the print shop to the International Minuteman Press franchise family.”

Diving deep, Hansen visited several International Minute Press stores in Arizona. “They have an exceptional reputation, and with 1,000 independently owned stores all around the world – including Canada, United Kingdom, Australia and Africa – they are the largest and oldest printing franchise in the world. It was a no-brainer.”

International Minute Press Manager Kelsey Hubbard worked with the previous owners at Print Raven for four years and joined Hansen’s team. “It was a good transition, really easy and smooth; plus, it’s great having the resources we have as a franchise,” said Hubbard, who was born and raised in Flagstaff. “This is one of those jobs where every day is different; plus, I know a lot of people that come through the door.”

“Kelsey is an invaluable asset,” said Hansen. “I don’t know what I’d do without her. She has a wealth of knowledge and has played a critical role in our transition and growth.”

With help just a phone call away, Hansen said it’s like having a business advisor in her back pocket. “A lot of people don’t understand what it means to be part of a franchise, but I can’t emphasize enough that we’re 100% local. At the same time, we have access to and support from people who want to see me succeed. Their support has been incredible, especially the last few years with COVID and supply chain issues.”

Paying a capped monthly royalty fee based on her sales, Hansen said International Minute Press has been a great partner. “Before I even opened my doors, I spent 10 days in the New York headquarters for training and I have ongoing support for my software, marketing efforts, vendor relations and more.”

The printing services that International Minute Press offers are many. “From printing banners and signs to promotional products, we do it all,” said Hansen. “We have an extensive list of vendors and suppliers.”

Red Rocks Writer founder and long-time magazine editor Stephen Hanks recently moved from New York to Sedona and needed a printer for his Al Jolson Journal, which he publishes twice a year. “I went through the process of researching printers in Sedona and Flagstaff and International Minute Press came in with the lowest bid. And when I found out it was a private, woman-
owned business, I went with them,” said Hanks. “The quality was terrific, the work was great, and the service was exceptional; plus, they work quickly.”

Although she has limited free time on her hands, Hansen loves live music and cooking when she can fit it in. “Our big 8-year-old boxer, Piper, is a rescue and loves to be outside, so she often takes us for walks.” FBN