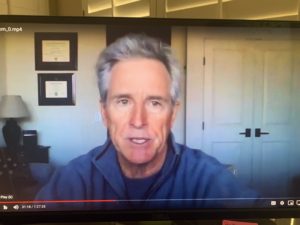 The value of the dark skies resource and what can be done to make sure the region’s exceptional dark skies aren’t diluted by light pollution were topics addressed by local leaders and national dark sky experts in two visioning sessions hosted by the Flagstaff Dark Skies Coalition (FDSC) via Zoom and facilitated by Arizona Town Hall President and CEO Tara Jackson and volunteer Chair-elect Evelyn Casuga.

Retired U.S. Naval Observatory astronomer and Coalition member Chris Luginbuhl noted the more than 60-year history of successful efforts by scientists and others to promote awareness, appreciation and protection of starry skies through educational efforts and lighting ordinances. “We feel there is so much more we can accomplish, beyond the traditionally understood interests of the observatories and professional astronomers,” he said.

The group discussed many benefits of dark skies, including impacts on wildlife and human health, spiritual and cultural connections, and educational and scientific advances.

“If you ever look at maps of sky pollution, you see this giant dark hole covering this whole four-corners area,” said NAU Emeritus Associate Professor of Astronomy David Koerner. “The motivation for protecting the sky has to be for people to see its value. There’s a big interpretive element.”

“When you look at the concept of awareness, impact and sustainability, when you talk about dark skies, it’s really about a sense of self and a sense of place – where we fit in the world and the fact that it’s not just all about us,” said former Flagstaff Mayor Coral Evans. “It creates wonder, entrepreneurship and exploration.” Evans suggested more involvement from other cultures and making dark sky celebrations more accessible to all people.

Marshall and Dr. Jane Whitmire are members of Camp Verde Dark Skies. The two have long been concerned about light pollution. “We are very interested in pursuing a regional emphasis on dark sky protection,” said Marshall.

Village of Oak Creek Dark Skies Chair Mike Ryan said an important component of protecting dark skies is what citizens, businesses and corporations are doing on the ground. “It seems that it would be good for the county or some other organization to provide rebates for people changing lighting fixtures and maybe for the corporate environment, tax credits because those are much larger projects.”

City of Flagstaff Economic Vitality Director Heidi Hansen suggested working with home improvement stores to identify a section for lighting fixtures to make it easy on residents to participate in dark skies protection. “We can help direct them to the right things to use in our community.”

Both Coconino County and the City of Flagstaff have posted a list and examples of appropriate lighting options on their websites.

“For many of the unincorporated areas of Coconino County, having dark skies is a way of life. It’s a value that they have,” said County Supervisor Liz Archuleta. “People are just amazed [with] the uniqueness that we have, the opportunity for it to be a draw economically, to preserve our scientific community and to see it also as preservation of our environment, preserving our skies. Think of how many people across the nation have never seen a sky full of stars like we see.”

Drew Carhart, a founding member of the Illinois Coalition for Responsible Outdoor Lighting (ICROL), who regularly visits Northern Arizona, participated in the discussion from his home outside Chicago. “There’s probably 80% of the population around me now who have never seen the Milky Way or seen a thousand stars in the sky. If you live in an area where you see that, you may not realize how it is to not have that over you and how easily you can lose it.”

Jane Whitmire suggested incorporating information about the dark skies resource into learning opportunities at schools and in communities. “I think back to the anti-smoking campaigns and what an impact children had on parents who smoked and urging them to stop. I believe that if that same sort of strategy were implemented on an educational level with various age groups, that it could also be effective for home lighting, business lighting and simply appreciation for what a valuable gift it is to have a dark sky where we see the stars.”

“We have such a legacy and history with science and astronomy and really top-shelf, very sophisticated international science,” said Genterra Enterprises Senior Vice President Rich Bowen. “That is part of who we are as a community. And you see that reflected in the kind of people who want to be here and the values that we have. It concerns me that if we’re not diligent in this pursuit, we’ll harm that.”

The Coalition has been seeking input from those interested in continuing and expanding efforts to support dark skies. “For decades, the Coalition set the stage to propel Northern Arizona as a dark skies leader worldwide,” said Casuga.

“They recognize the power of dark skies to inspire and engulf our senses. In protecting dark skies, science, art, culture, heritage and the economy are intertwined to touch our hearts and minds for generations.”

Jackson, who summarized the discussions, wrote, “Dark skies are bound up with the very identity of the region. For many, it is part of the regional legacy and way of life. Protection, preservation and promoting of dark skies supports the character of our region and gives us a unique regional selling point for visitors and businesses. The value we place on dark skies also supports our promotion of the region as one that fosters curiosity, cross-cultural understanding, exploration, creativity, critical thinking, and appreciation for science and the environment.” FBN