You are here: Home / Business / Restaurateur in the Making 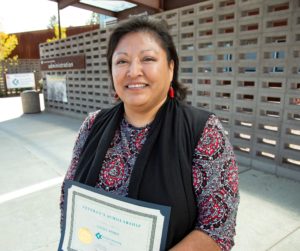 Nelda Achee served for 21 years in the U.S. Coast Guard, retiring as a Chief Petty Officer.

She was in charge of overhauling ship diesel engines worth millions of dollars to make sure they could do 26 knots (about 30 miles per hour). She would oversee dry-docking of ships in order to make them seaworthy again. She would manage projects where crews had to cut holes in ships to replace turbines.

But when Nelda Achee, mother of three children, grandmother of seven, returned home to the Navajo Nation after her retirement from the Coast Guard, she had a hard time finding work.

“I got turned down, it seemed, every other week,” Achee said, adding that she was told that she had too much experience, or that she should stay at home.

So, Achee decided to use her access to the G.I. Bill and go to school at Coconino Community College to study business. “It’s open to everybody,” Achee said. “There’s nobody to tell me, ‘Hey, you can’t do that.’ That’s how I see it.”

She added that she can write her own ticket and be her own boss, and she likes being in control. Besides, she said, “It’s something different from what I was doing.”

“Right now, the only thing I can see that would work is food service, especially on the reservation,” Achee said.

Unlike cities, where resources and access to them are more abundant, many locations on the Navajo Nation are sparsely populated and remote, requiring long distances to travel, she said. Additionally, most of the fare available is fast-food options, or small roadside locations. She and her husband, James, have been talking about it since her retirement from the military, and they have been saving money. They are currently looking at buildings and a suitable location to “throw up sticks.”

“I want to go traditional,” she said, referring to dishes like mutton stew with steamed corn and other vegetables.

She wants to create a space similar to one she experienced while stationed in Japan during her military career. She went to a soba house and enjoyed the savory offerings of chicken, beef and pork with noodles, a wide array of vegetables and broth.

“It’s a huge place, and it’s got these huge tables,” she said of the soba house. “And you could see eight to 10 people at the tables, and they had a different soup each day. So, I want to present something big, where you can be with family, be together.”

Achee said she wants to start off small, tweak the menu and make it work with people’s needs and what their tastes are. She doesn’t have a name for the restaurant – yet. “But it will be a Navajo name,” Achee said and smiled.

At CCC, she is working on her associate degree in business, and she is scheduled to graduate in May. She also has applied to Embry-Riddle Aeronautical University because she is interested in pursuing an online bachelor’s degree in project management. Although she has considerable experience in project management during her time in the military, she was inspired by a colleague, who turned a whole chapter house on the Navajo Nation around and got it moving in a positive direction. Her friend’s project management acumen and skill at setting up procedures and seeing them through to application to ensure proper function of the chapter house for the good of the people the chapter represents, spurred her to consider getting the degree. And, while the degree will surely fit with her business aspirations, she also has long been interested in serving veterans at home.

“Right now, I do a lot of things with the veterans already,” Achee said.

She is the commander at the Shonto Chapter, secretary and treasurer for the Western Navajo Agency, and serves on the Advisory Council for the Office of the President and Vice President of the Navajo Nation. She also helped set up the first Veterans Affairs office on the Navajo Nation.

Achee recently received the Veterans Scholarship through the CCC Foundation. She said she’s not working right now, and with all the time she donates on top of her classes, the scholarship will help pay expenses not covered by her pension and the G.I. Bill.

“This is a tremendous help,” Achee said. “It’s like a sigh of relief.”

The funds will help her pay for books and help her finish paying for the laptop she uses for school. “It means a lot to me,” Achee said of being selected for the scholarship. “Not a lot of veterans are recognized. They just float through our lives and we don’t really notice them.” FBN