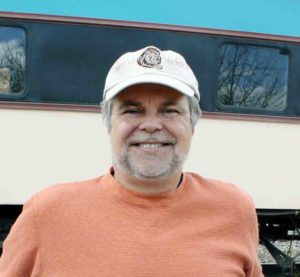 Some things are the same, such as the dramatic canyon views as the train follows the winding Verde River, but there are new and exciting additions to the magical 20-mile journey from Clarkdale to Perkinsville and back on the historic Verde Canyon Railroad (VCRR).

Traveling on tracks carved out of rugged landscapes in 1912, the award-winning scenic wilderness train is celebrating its 30th anniversary as “Arizona’s Longest-Running Nature Show.”

The rail anniversary is the perfect time to serve up some changes to the experience, including a farm-to-table emphasis on offering fare from growers in the Verde Valley.

In addition, a local celebrity has been added to the entertainment: Arizona’s beloved travel enthusiast, writer Roger Naylor, who has been chosen to add his folksy charm to the Verde Canyon Railroad’s onboard narration.

“Verde Canyon Railroad is proud to have such a celebrated Arizona voice as part of the customer experience,” said Vice President of Passenger Services Teresa Propeck. “This train line has been an integral part of the infrastructure that built the Verde Valley and the great state of Arizona. We will continue this legacy by working with locally owned and operated businesses every chance we get. Whether it’s the radio stations, wineries, restaurants or hotels, the true charm of Arizona is essential to the Railroad.”
From their distinctive vantage point in open-air viewing cars, passengers get stunning views of the geology and archeology, as well as the flora and fauna of one of Arizona’s most scenic inner canyons.

The three-and-a-half-hour rail journey provides the perfect palette for the narration of Naylor, famous for his whimsical and colorful storytelling.

Known for his columns in The Arizona Republic, fun travel books on Route 66 and Arizona State Parks, and his popular book, “Boots and Burgers,” Naylor, a longtime resident of the Verde Valley, often shares area highlights in his writings, including frequent and appreciative mentions of the Verde Canyon Railroad.
“The Verde Canyon Railroad people knew me because I live in the Verde Valley and had written about the train many times in articles and books,” the author said. “And they had seen me give presentations before and just thought I would be a good fit. They’re an Arizona treasure and I’m an Arizona rambler and storyteller.”

The Verde Canyon Railroad is a spectacular adventure.

“It rumbles into a remote wilderness, nestled between two national forests at the confluence of desert and wetlands,” Naylor recounted. “It follows the Verde River into a high-walled canyon bristling with wildlife. And every season brings something different.”

Recorded locally at Yavapai Broadcasting, Naylor’s narration interweaves classic train tunes of every genre with 100-plus years of rail history, including the stories of ancient dwellers and ranchers that have called this rare riparian wonderland home.

The railroad came to Naylor with the idea for a new narrative and provided a script that he said he polished up with folksy, humorous touches.

“This is all new to me,” he said. “The railroad had the same narration for many years, and I guess they felt it was time for a change. I was honored when they asked me to become the voice of the train. And you can’t even escape in the depot because that’s me making the announcements and calling ‘All aboard!’”

After many trips on the Verde Canyon Railroad, Naylor said the experience is always a delight.

“The good news is that it changes very little. It’s all about the classic train ride and exquisite scenery. “When you’re riding the rails, soothed by the gentle swaying of the train, stress just seems to melt away. You’re surrounded by jaw-dropping scenery, you’ve got plenty of food and drink, and someone else is doing all the driving.”

Naylor, who was born and raised in Cincinnati, Ohio, loved cowboy movies as a boy and was drawn to the sprawling lands of the West. He came to Flagstaff in 1975 to attend Northern Arizona University.

“And it was love at first sight,” he recalled. “Arizona plucked my heart right from my chest. I was crazy swoony in love with Arizona.”

His love for the land led him to drop out of college to have more freedom to explore every corner of the state.

“My parents thought I was a drifter, but in reality, I was a travel writer in training,” he said.

In 2018, Naylor was inducted into the Arizona Tourism Hall of Fame for his passion of travel and storytelling.

Food and drink, and making sure the train adventure is a tasty journey, is another focus of improvements on the Verde Canyon Railroad.

The roots of the Verde Valley as an agricultural region run deep and the railroad has partnered with two small growers who are supplying vitamin-rich produce and greens to the train and its Copper Spike Café.

These locally grown veggies and greens are now succulent ingredients for meals at the Clarkdale depot and appetizers onboard the train.

Sweet Greens Arizona, operated by Eric Kostecki, produces micro-greens or sprouted seedlings, now available in 50 different kinds, some of which are used as ingredients at the cafe.

In addition, Luke Hammond and his Liquid Life farms is leasing riparian fields at the Blazin’ M Ranch in Cottonwood to grow tomatoes, watermelon, squash, herbs, corn, spring mix and other seasonal crops that are in high demand, including as railroad fare.

Briana (Bri) Lawton, born and raised in Clarkdale, is the kitchen manager at the Copper Spike Café. She uses her background in Arizona’s wine industry, as well as her 16-year experience in food service and her connections with these local growers, to elevate the train’s menu options.

“I’m a strong believer in farm-to-table and fresh food,” Lawton said. “Just because we’re a quick-pace café doesn’t mean that our food can’t be bursting with flavor, beautiful to look at and healthy. I’ve worked with many amazing chefs and have learned a lot. That extra step in picking and planning goes a long way and people can tell the difference between food that’s made with love and thought, versus food that’s just simply assembled.”

The connection between Hammond and The Blazin’ M Ranch, whose chuckwagon dinner and stage show are temporarily dormant, is strong and working well to provide a source of high-quality vegetables and fruits.

“He approached us about this idea and we were intrigued,” said Blazin’ M Ranch owner Lori Mabery. “Patriarch and founder Chuck Mabery used to do organic farming here 25 years ago, so it’s really come full circle. It all came about at the perfect time. We’re thrilled to have him here. Hammond, his wife and three young children do it all. This is their second full year.”

Much of the produce is marketed from a farm stand at the ranch, but luckily for Verde Canyon Railroad, Hammond allows early access for Lawton to select Liquid Life Farm melon, tomatoes and cucumbers for the train’s appetizers, and basil for the popular “Verde Margarita” mix.

Trains run year-round on a varied schedule depending on the season.

Because of health requirements in effect in response to COVID-19, changes to food service, as well as passenger load and spacing, are in full effect at the depot and onboard the train.

“We look forward to welcoming you aboard Verde Canyon Railroad,” Propeck said. “Our historic cars allow optimum viewing of our magnificent canyon from both indoor seats and on outdoor viewing cars. Our seating, even with social distancing, is intimate, with a standard center aisle so we ask that you respect your fellow passengers, allowing everyone to enjoy the trip safely and comfortably.”          Standards in place include masks required of all staff and passengers at the depot, inside the museum and onboard the train. Passengers and employees have their temperatures taken when they enter the depot and are giving wristbands to confirm a temperature of 100.4 or less.

Maximum capacity is 50 people at the depot at any given time, and seating, at less than 50 percent capacity, is spaced to allow for social distancing onboard the train.

Lunches and individual appetizer trays for first-class are sealed before they leave the kitchen. There is no communal food. FBN

For more information about the travels, adventures and books of Roger Naylor, visit rogernaylor.com.