You are here: Home / Business / Riordan on Tap 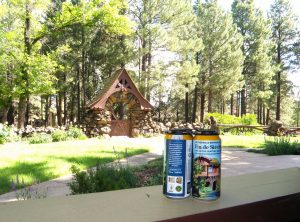 One hundred and eighteen years old, the expansive ponderosa pine and stone Riordan mansion stands as an example of gracious living in a territorial town. Preserved by Arizona State Parks, it serves as a tribute to Flagstaff’s early beginnings, showcasing an Arts and Crafts style of architecture, a label that describes more than the structure. It’s about using local materials in the building, the furniture and the gardens while blending with the natural environment and promoting a philosophy of giving back.

Mother Road Brewing Company, steeped in a love for Route 66 history and giving back to Arizona, has created its own label for the Northern Arizona landmark with the Fin de Siècle Turn of the Century Saison. The craft beer was concocted in honor of Riordan Mansion, being sold now in collection-worthy cans featuring a painting of the mansion by artist Linda Sherman and on tap at the brewery on Mike’s Pike, a street named long ago for Michael Riordan.

The label reads, “This rustic ale greets you with citrusy esters, complemented by peppery phendics from the warm farmhouse yeast fermentation. A beer fit for warm afternoons spent exploring the history of the Southwest.”

The Riordan brothers, Michael and Timothy, started Arizona Lumber and Timber Company in 1881. They built their 13,000-square-foot mansion to house their families, complete with indoor plumbing and electricity. It includes two almost identical homes connected by a common billiard room.

“The Riordans were so instrumental in making Flagstaff a community,” said Riordan Mansion State Historic Park Manager Nikki Lober. “They were the largest employer here for 50 years and played a significant role in supporting the city infrastructure, getting the water system established and operating the first electric company out of the lumbermill. They started the public library, helped to create what is now Northern Arizona University and advocated for separating Coconino as its own county with Flagstaff as the county seat.”

Mother Road Brewing Co. Founder and CEO Michael Marquess is a graduate of the NAU School of Hotel and Restaurant Management. His fondness for his alma mater, Route 66 history and supporting Arizona causes has long been manifested in special brews.

The Archive Ale, for example, was inspired by the diversity of Route 66 and benefited NAU’s Cline Library Special Collections. Money raised allowed the library to hire two interns who documented oral histories and archived hundreds of boxes of material associated with America’s famed highway.

“One of the great parts about making craft beer is having fun in the names and deriving the stories. Of course, with Mother Road, we’re going to stay true to themes of Route 66,” said Mother Road Brewing Director of Arizona Craft Beer Stephanie Henderson. “Anna Durkee operated an all-woman-run granite mining company in Alaska and she received a tip on a piece of land in Oatman, Arizona shortly before the Gold Rush happened in 1916. She ended up purchasing a mine in Oatman and became very successful.”

As Henderson tells the story, this businesswoman was surprised and a bit annoyed when the Wichita Daily Eagle newspaper found her investment to be newsworthy. “If a man were successful in his investments as I have been, nothing would be thought of it. But because I am a woman there is a great commotion over it,” she was quoted as saying.

One of Mother Road’s wildly successful labels is the Conserve & Protect Golden Ale, which has brought in nearly $40,000 to the Arizona Game and Fish Department for the protection of Arizona species such as the Sonoran desert tortoise and the Mount Graham squirrel.

“We started this project in 2019 and we make this beer in partnership with the Arizona Game and Fish Department,” said Henderson. “We thought we would come out with a small batch of this beer and donate a portion of the proceeds back to Arizona Game and Fish. We shortly realized after that run, there was absolutely no reason we shouldn’t be doing this all of the time.”

The Conserve & Protect campaign won Mother Road the Environmental Excellence Award of Distinction, issued by Governor Doug Ducey and Arizona Forward. “For a beer to have won that award is really profound,” said Henderson.

Meanwhile, funds from the sale of Fin de Siècle Turn of the Century Saison will support the restoration of Riordan Mansion’s decorative stone arch, which leads guests out of the woods and onto the patio. The project is expected to cost about $16,000.

“We are very grateful for this unique opportunity to be able to work with the community in this way,” said Lober. “Michael [Marquess] had come forward and asked us about doing something to support the mansion. I love the fact that Mother Road is located on Old Route 66 and embraces the historic aspect of our community. I’m not a beer drinker, but I hear people are really enjoying it!”