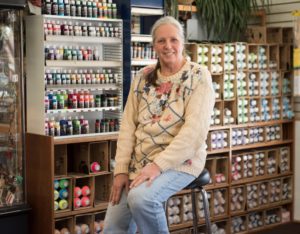 “I am the captain, the crew, the clean up and I’m fueling the boilers.”

Visible Difference opened in the mid-70s. Border bought it in 2005.

“I decided to keep the name,” she said. “It has been at this location for 40 years and it is the only art supply store in Northern Arizona, which is a humongous area. We wanted to retain that distinction.”

Border obtained ownership just before what she calls “the-not-so-Great Recession.”

“When the economy tanks, art is the first thing to go,”

And to make matters worse, it was a time in her life that can be described in rafter terms as “white water.”

The recession started to take its toll and her partner, Michael Kabotie, died from flu complications in 2009.

She met Michael while she was working at the Museum of Northern Arizona where he was working on a mural called “The Journey of the Human Spirit.”

With Michael gone and the recession bearing down, Border had to make a decision.

“It boiled down to me turning this ship around. I had to decide to let it go or hang in there. I decided to hang in there,” she said.

“I came pretty close to calling it quits.”

Her customers begged her stay open.

When a little art store in Sedona closed, she knew she had to hang tight.

At times, she still does not know how she survived, other than eating a lot of beans and rice.

“It’s the beauty of the human spirit. I had to come up with a new plan. You have two choices. You can go back or go forward. I didn’t like the thought of succumbing. It is hard to turn a ship around by yourself. I have weathered a lot of hurricanes. You can’t just close up. I couldn’t let the ship sink.”

She said she is still getting the shop back to its former self and has added a framing service and art classes for adults.

Her biggest competition is the Internet.

“It’s not a level playing field,” she said. “The Internet has impacted little businesses in a big way.

“Small business is the backbone of this country, the mom and pop shops, the brick and mortar that survived [the recession] because of the tenacity of the owner.”

An Arizona native, Border was born and raised with Papago Park as her backyard.

“We could ride our bikes for five miles and be gone all day.”

Border attended East Phoenix High School and pursued a college degree in art which she earned from NAU. Out of college, she created graphic art for several publications. She missed fine art and opened her own studio, Del Rio Studio and Gallery in 1999. She worked at the museum part time and headed the Flagstaff Artists Coalition from 1999 to 2003.

“To this day, people come in and say, ‘I can’t believe this place is still here,’” she said. “I am the third owner and hopefully I can pass the baton to someone who has the passion to do what I have done.”

Gretchen Lopez, an artist and veteran art teacher who also teaches at Visible Difference, said Border works tirelessly to keep art and art supplies front and center. “I have been going into her shop for several years. We talked about starting small classes there. The wonderful part about Ruth Ann is she is open about sharing art with the community. It’s a wonder how she can keep everything going.”

Where do you see your business in the next five years?

“In someone else’s capable hands, I might have a hand in it, but in five years, I will be 66.”

What is your favorite snack?

“Yesterday. I had a friend show up and say I just saved someone’s life. It was her husband and she wanted to strangle him. She came here instead.”

What advice would you give someone who wants to own a small business?

“What is your super power and when do you use it?

“Every day when we roll out of bed, you have to pick an attitude and so you pick a good one.” FBN