By FBN on September 7, 2019 in Community Profile, FBN Spotlight 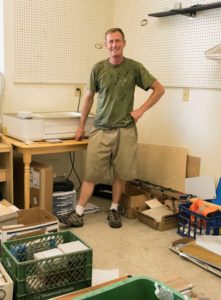 After hearing and taking to heart what tourists like to buy, Blake Nabours, owner of AZ Segway and Pedal Tours, is on a roll to open the Grand Circle Outpost, an exclusive emporium featuring souvenirs all manufactured on site.

Encompassing what Nabours refers to as the “grand” circle, Flagstaff, Sedona, Route 66, Grand Canyon, Page and Las Vegas, his novelties will feature the genre of these bordering neighbors on t-shirts, prints, key chains, magnets and other items.

Nabours says his new venture was a natural evolution. “Our pedal touring business was operating at the Sports Exchange located at Aspen and Beaver Streets. When the owner, Katie Peterson, decided to close, I decided to stay. There were no other locations optimal for the price and we could expand our offerings and cater to travel and tourism.”

“I gave him [Nabours] the opportunity to rent the building so that he could make it as successful as he could,” said Van Odegaard, landlord of the Grand Circle Outpost building and owner of Odegaard’s Sewing Center.

Flagstaff Convention and Visitors Bureau Director Trace Ward believes the Grand Canyon Circle Outpost will be a great addition to downtown. “Our historic Downtown is a strong draw for both domestic and international visitors. The more we can provide things to do and information on the area, we are providing a better visitor experience, and this is good for everyone.”

“As a vocational educational teacher, I had hands-on design experience teaching the use of laser printers and embroidery machines to the students,” said Nabours. “I saw the application and came up with the idea of making our own souvenirs. It gets crazy with ordering and what stock will sell or not. To get around that challenge, I decided to make the souvenirs myself.”

Also on his agenda is a “selfie” 10” x 10” photo booth of sorts where patrons can picture themselves on the edge of Horseshoe Bend near Lake Powell, on Route 66 or with the iconic Las Vegas sign.

“There are great amenities for downtown,” said Downtown Business Alliance Flagstaff Executive Director Terry Madeksza. “With the influx of chains and online giants, providing interactive and engaging experiences is key. The opportunity to hand-craft unique souvenirs and learn the history and little-known tidbits about Flagstaff as part of a tour offers just that – experiences that you can’t find elsewhere.”

Terry McNeal has worked with Nabours for the past three and says he is excited to see the outpost come to fruition. “Knowing that all the products will be manufactured in-house, instead of another country is really cool.”

Nabours grew up in Flagstaff and attended college at James Madison University, in Virginia, where he studied education. He was a taught in Flagstaff for five years before starting AZ Pedal Tours in 2013, adding Segways in 2016.

“When it comes to business, always bet on yourself and work as hard as you can to improve the odds. That was from my father, Jerry Nabours.”

“I eat downtown often and I really like the Market Burger with a fried egg or the chili at The Lumberyard.”

If you could master a new hobby in the next five years, what would it be?

“Skydiving. I really want to take up skydiving. One of my goals is to take some time off in the next year or two and start the certification process. I’ve done a tandem jump and enjoyed the experience but I want to jump in with both feet, so to speak.”

“My million would only be a start but I want to build a hands-on science museum for kids and families in Flagstaff. I went to The Exploratorium in San Francisco as a kid and still remember a number of lessons and exhibits to this day. It was incredible. I think it would be cool to build a similar place here but do it all as a not-for-profit endeavor to keep the motivation on building a really cool experience that is accessible to all kids and families. It would take a lot more than that but I would gladly put a million towards the project.”

If you could meet someone, past or present, who would it be?

“I would want to meet someone from the past that made a really big mistake or got a raw deal in some way. I would be interested in hearing that person’s perspective or how it affected him.” FBN