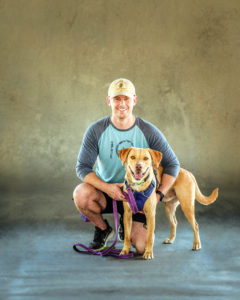 Soldier’s Best Friend (SBF) is an Arizona program designed to give service members improved well-being and quality of life through relationships with service animals. The group behind the program is dedicated to bringing about positive change for veterans diagnosed with Post-Traumatic Stress Disorder (PTSD). Those involved say the impact SBF has had has been life-changing.

Following his father’s passing in 2007, Dr. John Burnham had a desire to connect with something bigger. He wanted something more, something that engaged his military interests, honored his father and allowed him to use his personal and professional talents to a greater degree in service to the community.

Through his veterinary practice, Dr. Burnham worked with veterans and cared for their pets. He witnessed how the interaction with the animals helped returning vets interact more comfortably in civilian environments, sparking an idea. This idea was nurtured by the study of institutional research that supported the therapeutic relationships he was seeing and by outreach to experts in the field of service animals, behavioral science and veteran services.

Dr. Burnham knew there must be a way to give more veterans the chance to experience the unconditional love and support that a canine companion can bring. He also knew he had a unique opportunity to help reduce the number of homeless dogs living in local shelters. With this alignment of purpose, Soldier’s Best Friend Burnham’s dream and driving passion. With the support of his wife and business partner, Jan, the organization became a reality and was founded in 2011.

Burnham’s goal has been to create a non-profit devoted to placing and training service dogs for veterans at no cost to them. His wish was to acquire many of the dogs through local rescue organizations, thus easing the pet-overpopulation problem.

Pairing Up for Training

SBF trains across Arizona, currently in Prescott, Flagstaff, Phoenix Metro, Tucson and the Sierra Vista regions. Requirements for eligibility outline that the applicant must have a confirmation of diagnosis of combat-related PTSD and/or TBI, participate in a thorough interview process (including a home inspection), provide two letters of reference, and undergo a background check, prior to being considered for acceptance into the program.

Soldier’s Best Friend Executive Director Katie Ares in Phoenix says adoption specialists meet with the veterans to discuss individual needs that include lifestyle, other pets in the home, children in the home, allergies, what the animal’s specific tasks will be, etc., to find the best possible fit.

SBF has a dedicated training facility with more than 3,300 square feet at the Peoria campus, built in 2016. In the outlying regions, the group uses borrowed and donated space, such as the Warrior Healing Center in Sierra Vista. The teams often can be seen at local parks, outdoor mall areas and other local businesses where they have an opportunity to get reaccustomed to everyday situations in everyday environments.

Training typically takes a minimum of six to nine months once the teams are paired. The teams attend training sessions twice a week and each session lasts approximately one hour. They use the owner/handler model, so their professional service dog trainers train the veteran to train their dog. As of July, more than 300 veteran/dog teams have graduated from SBF’s Service/Therapeutic Companion Dog Training Program. They recently had their first in-person graduation ceremony since 2019!

A Decade of Support

“As a military spouse and daughter of a Vietnam Veteran, the mission is very near and dear to my heart,” said Ares. “I have also seen firsthand the positive impact that dogs have on the lives of people living with PTSD. Following the teams from the application process through graduation is an extremely impactful opportunity. Often, the veterans haven’t left their home in quite some time, might have their blinds drawn, or in some cases, even foil on their windows. To see them one year later taking the stage at a graduation, speaking publicly, and sharing their testimonials of how their lives changed, celebrating in a crowd with their family and loved ones, and then becoming a mentor to incoming veterans, speaks volumes.”

Carrie Haas has been training dogs for 40 years, five of which have been with SBF in Tucson and Sierra Vista. She says the job she’s performing is her heart’s work. “It’s been rewarding to see the change in vets, their being able to do stuff now that they found nearly impossible before taking part in training.”

Ares says the success the program has had exemplifies the vision that Dr. Burnham had a decade ago.

SBF is celebrating its 10th anniversary with a golf tournament on Nov. 6, at Talking Stick Golf Club in Scottsdale. All proceeds will go toward programming. For more information, visit soldiersbestfriend.org.

Those interested in volunteering at SBF may apply at soldiersbestfriend.org/how-to-help/volunteer.html. FBN