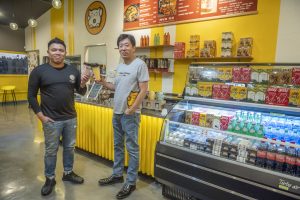 Foodies might suggest that authentic Asian cuisine comes from heritage and culinary techniques passed from one generation to another. Sono Kitchen and Boba Owners Chuan Lu and Jerry Tseng may well agree, as they bring a savory spin to dishes from their native countries of China and Taiwan to Arizona.

With locations in Sedona since 2020 and recently in Flagstaff, Sono Kitchen and Boba may be the new kid on the block, but its cuisine is steeped in traditional flavors. It is already a hit with locals, especially with Northern Arizona University (NAU) students.

Lu and Tseng had a feeling it would be. Lu, who was born in China, says he found out that a lot of small towns are undeserved by major brands. “This gave me some thoughts. If we create something new, we shouldn’t underestimate the small town. When we created Sono Kitchen and Boba, instead of jumping to Phoenix, we decided to start where we are familiar.”

So, they opened Sono Kitchen and Boba in Sedona.

Tseng’s parents owned the well-known Szechuan Restaurant in Sedona since 2008. He worked at the restaurant for many years as manager and it is where he met Lu. “Chuan was a repeat customer, so we got to know each other and became good friends. We were both going to NAU at the time, where I was studying Interior Design.”

Tseng’s wife, Sonoko, also works at Sono Kitchen and Boba. They have two boys, ages 6 and 8, and reside in Sedona.

Adding to their partnership at Sono Kitchen and Boba, Lu and Tseng acquired joint ownership of Szechuan Restaurant upon the retirement of Tseng’s parents. “I really admire my dad. He is an international chef and he was head chef at Hyatt in Korea,” said Tseng. “I learned a lot from him.”

The menu at Sono Kitchen and Boba is a commingling of both Lu and Tseng’s Chinese and Taiwan cultures, along with some suggestions from Tseng’s father. Signature dishes include Taiwanese Pork Don, Sono House Noodles, Teriyaki Chicken Don, Oyako Don, Bento Boxes, Salt and Pepper Popcorn Chicken (a bestseller) and the popular Boba tea.

“Salt and Pepper Popcorn Chicken is a very popular street food in Taiwan at night markets,” said Tseng. “A lot of people make it; however, it doesn’t have authentic favors. We believe this is our opportunity for us to introduce the real deal.”

Boba tea became popular in the 1980s and is a milk tea with tapioca balls called Boba.

“Our Boba tea is authentic,” said Tseng.  “Our distributor is direct from Taiwan, which is very important to us. We have many comments that our Boba tea is not as sweet as others. That’s because the black tea that we use brings out the flavor. We have 10 options for the Boba tea.”

Born in Bejing, Lu came to NAU as an international student and obtained a degree in computer information systems and later earned his MBA. “Before coming to the United States, I was an air traffic controller, as was my wife, LynnLee. After graduation, I worked for Panda Express in Prescott and worked my way to vice president of operations overseeing the East Coast and Canada markets.” Lu has two children, ages 21 and 15, and lives in Flagstaff.

Housed in the prior establishment of China Garden Restaurant, Lu and Tseng knew the previous owners who retired. “We approached them and talked to them about our intentions” at the end of 2021.

Sono Kitchen and Boba employs a total of 14 employees in Flagstaff. “We talk to our employees all the time and we want to help them have better lives,” said Yseng.  “We want to inspire them and give them guidance. A lot of young people work hard but they don’t have direction. We want to open up their thinking so they can plan for their life ahead and reach their personal and professional goals.”

“I really like working at Sono Kitchen and Boba,” said NAU Environmental Sustainability Major Amanda Hammer. “I make Boba drinks and run the register. The food is really good, too. As a vegetarian, I’m able to substitute tofu, so it’s great I have that option. Also, during finals, Lu and Jerry gave me time off to study for my finals and I didn’t even ask them. I was so surprised and thankful.”

Down the road, Lu and Tseng would like to grow their concept of Sono Kitchen and Boba and might consider the possibility of extending their brand. “With our experience and expertise, we might consider moving outside of Arizona. We had a couple from Colorado who asked if we were a franchise, as they were interested in buying.” FBN

Sono Kitchen and Boba is located at 1301 South Milton Road in Flagstaff and 285 Jordan Road in Sedona. For more information, visit www.sonokitchen.net.

Photo by V. Ronnie Tierney, Fresh Focuses Photography: Sono Kitchen and Boba Owners Chuan Lu and Jerry Tseng have restaurants in Sedona and Flagstaff. Lu, who was born in China, advises business owners not to underestimate the power of small towns.