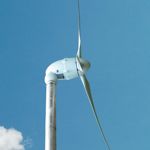 Southwest Windpower, the world’s leading supplier of distributed wind generators, is unveiling its newest and most efficient small wind turbine—Skystream 600—which could put wind energy in thousands of homes and businesses worldwide.

Unveiled at the 2011 International Consumer Electronics Show (CES) with the backing of GE (NYSE: GE), in Las Vegas, Skystream 600 produces 74 percent more energy for commercial and residential use than its predecessor—making it the most efficient power grid-connected turbine in its class, providing an average of 7,400 kWh of clean, low-cost energy per year per household in 12 mph average annual wind speeds.  Depending on the wind resource, siting and energy efficiency, a Skystream 600 could provide up to 80 percent of an average home’s energy requirements.  Skystream 600 will be the first fully smart grid-enabled wind turbine when available to the public in March 2011, making it easy for consumers to connect their homes or businesses to wind-generated electricity.  With its state-of-the-art interactive Skyview™ system, users can monitor exactly how much energy the wind turbine is producing from anywhere internet access is available.

Skystream 600 is part of GE’s “home of the future” exhibit at the Consumer Electronics Show, which showcases innovative products designed to help consumers manage home energy generation, cost and consumption.  As the country’s leading supplier of large wind turbines, GE invested in Southwest Windpower, the world’s largest supplier of small wind systems, in early 2009 through its energy investing arm, GE Energy Financial Services.  As part of GE's ecomagination clean energy business strategy to drive growth and solve the world’s energy challenges, GE has committed to invest $10 billion in clean technology R&D by 2015, doubling the amount it spent in the past five years.

Southwest Windpower, based in Flagstaff, Arizona, was founded more than 20 years ago, has 170,000 units installed worldwide and sells 15,000 turbines annually. Over the past four years, Southwest Windpower has grown 3.5 times in annual sales volume.  More than 13 million homes in the United States could install a wind turbine.  With the development of lower-cost, more efficient systems, Southwest Windpower plans for exponential growth over the next five years.

Southwest Windpower is the world’s leading supplier of distributed wind generators. With history lasting more than two decades, the company is a global leader and pioneer in the design, manufacturing and distribution of small wind systems (400-3000 watts). Southwest Windpower has built and shipped more than 170,000 wind turbines to more than 120 countries worldwide and has sales representation in over 88 countries. Headquartered in Flagstaff Ariz., the company also has operations in Cologne, Germany and a joint venture in Ningbo, China. Applications for Southwest Windpower systems include residential homes, commercial properties, micro grids, remote cabins, telecom transmitters, offshore platforms, water pumping and sailboats. Southwest Windpower is the manufacturer of such well-known products including Skystream, Whisper and Air lines of distributed wind systems.

For more information on Southwest Windpower and its products, visit www.windenergy.com.

GE (NYSE: GE) is a diversified infrastructure, finance and media company taking on the world’s toughest challenges. From aircraft engines and power generation to financial services, health care solutions, and television programming, GE operates in more than 100 countries and employs about 300,000 people worldwide. For more information, visit the company's Web site at www.ge.com.

Marlboro Man in Action at the Grand Canyon

Some boys do grow up to be cowboys, and some cowboys even grow up to be Marlboro men. Such was the case for Grand Canyon National Park Service (NPS) Wrangler Ed Forbis. Born on a ranch in Deer Lodge, Montana, from the brim of his hat to his well-worn boots, Forbis is a genuine cowboy. His warm country accent and perfectly-shaped thick cowboy mustache portray the rough cowboy on a bucking horse that he portrayed in Marlboro advertisements. “I grew up living next to Darrell Winfield, who played the famous Marlboro Man for over 30 years,” said Forbis. “He was a horse trader and he’d have about 300-400 horses on his ranch.” “After I graduated high school, I went to ride colts for Daryl. He’d pick out young dummies like me to get on them brooks and break them in.” Further down the road, Forbis was hired by Marlboro to ride bucking horses as a stuntman for Marlboro advertisements and television commercials, a job that lasted 12 years. Footage of Forbis riding a bucking horse with a herd of wild stations not only became popular in the United States, but worldwide.

After almost 13 years on the Flagstaff City Council, I chose not to seek reelection. My current term ends this month, and as such, this will be my last article as mayor for the Flagstaff Business News.

Ten Years of Recovery Through Nature

For 10 years, Back2Basics Outdoor Adventure Recovery has been using the natural environment to help young men recover from addiction. The Flagstaff-based program engages men, ages 18 to 35, in a variety of wilderness experiences that are emotionally and physically safe, combined with more traditional therapies such as process groups and one-on-one counseling with a clinician.

This year has been one for the record books with chaos, division, fear and uncertainty unlike anything many of us have experienced in our lifetime. Anxiety is best defined as a fear of the unknown.