You are here: Home / Business / Staying in the Saddle 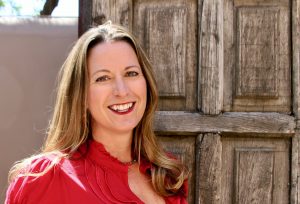 Author shares memoir about the rough ride to save the family’s Flagstaff area ranch.

The fourth-generation Arizonan shares her narrative about what happens when you take a leap into the unknown but still land in the saddle.

It relates to how Morrison and her husband moved to Flagstaff in March of 2011 to try to help her parents make their Northern Arizona ranch profitable.

While fighting for its future, she simultaneously sought to salvage her marriage and rediscover her best self.

The events in “Barbed” take place between 2011 and 2014. The author originally wrote the book as a personal project, not intending for it to become public, believing that only memoirs of famous people get published.

Eventually, she decided to heed the wise words of well-known author Sherman Alexie, who told an audience she was part of years prior, “You had an epic day today. You have stories to tell.”

The memoir recounts the barbs of ranching and relationships set in the rock-strewn landscape of her family-owned horse and cattle business.

“Barbed refers to the barbed wire that is ubiquitous to ranching, as it is comparatively cheap, hardy and effective fencing material,” Morrison said. “Much of my experience ranching also had to do with some form of negotiating boundaries, either physical or relational – harrowing either way – making the name feel actually and metaphorically appropriate.”

Morrison said she wrote the events of “Barbed” after leaving the ranch in 2014. She rewrote most of the book in 2019 when she connected with Soulstice Publishing in Flagstaff, a company publishing “books with soul” that told her they liked memoirs.

The ranch land referred to in her memoir “was collectively two owned parcels south of Flagstaff, two owned parcels between Sedona and Cottonwood north of Highway 89A, and thousands of acres of publicly-owned land to which we had grazing permits around and in between,” Morrison explained.

The original acquisition of the land “goes back to a great cotton harvest in the late 1950s or 1960s that gave my grandfather and great uncle capital to invest in ranch land,” she said.

The ranch went into business with the sale of “calves to backgrounders who would grow them for sale to feedlots for finishing and harvest,” Morrison said. “We referred to ourselves as cow-calf ranchers, which meant we grazed our herd of cows in the company of a few bulls in the fall, with the intent of having calves birth in the spring. After selling calves in the fall, the process would begin again.”

People who make the sale of cows or beef profitable on grazed land in Arizona have either far more land, which allows many more cows, or “far less expenses because they do the work themselves without hired labor,” she said. “Neither was an option for my family when the ranch came into my grandmother’s ownership and father’s management.”

Because her grandmother was in her 80s and her father’s experience had been in row crops and feed lot and dairy operations, he chose to employ a foreman and cowboys with local and herd knowledge.

The Forest Service, which sets the number of animal units allowed on permitted grazing land annually, had halved them just before Morrison and her husband arrived to help out.

“At that point the expenses to revenues simply didn’t pencil profitably anymore,” she recalled.

Morrison is an accomplished horsewoman with almost four decades of horse experience. The book details the varied and meaningful relationships she had with some of the ranch’s many horses.

In her memoir, Morrison describes cold-hearted cowboys and funny farriers and tells how she learned to ranch one-handed after a scary fall from one of her favorite horses that resulted in a broken arm.

It’s a love story with tales of devotion to hard working horses and to the gritty challenges that await along the trail to every panoramic view.

Showing ingenuity in the face of economic hardship, Morrison and her family researched or tried a number of creative uses for their lands, including growing marijuana, making wine and offering horseback rides with cattle “roundups” to the public.

She had hoped that the move to the ranch might bring her and her husband closer, but instead it strained their troubled marriage. Ultimately, they divorced.

Her first book has been well received.

“Julie Morrison’s persistence and drive teach us how to let go of what doesn’t work and develop what does. An extraordinary memoir and one we highly recommend!” said Chanticleer Reviews (five stars).

Her memoir was also the 2018 runner-up in nonfiction in the San Francisco Writers Conference contest and was shortlisted in Chanticleer’s 2019 Journey Nonfiction Awards.

Morrison says she has learned much from the process of writing and promoting her first book. “It’s still teaching me! It’s my first published book, so everything about the process, from the choice of bindings to media interviews, is all unfamiliar and humbling. The theme of the book from the time I wrote it was that people, for the most inexplicable and unselfish reasons, will often give us a chance. I am happy to say that continues to be true.”

Morrison will be available for a book signing during the First Friday Artwalk, Oct. 7, at Bright Side Bookshop downtown. FBN