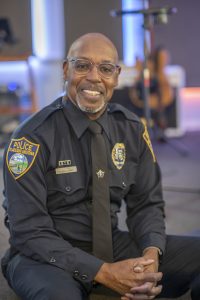 Stepping into his role as chaplain for the Flagstaff Police Department, Nathaniel Bradford says he comes into the position with a great deal of understanding about the kinds of challenges officers face.

“I led a violent life and was a drug addict at the age of 14,” said Bradford, who, at age 15, lived on the streets of South Bend, Indiana. “I was so bad, I was kicked out of the school system. I joined the army at the age of 17 and that brought discipline and stability into my life. As bad as I thought I was, those drill sergeants taught me a thing or two.”

Today, Bradford is lead pastor at Mountain View Church in Flagstaff and does not hold back when it comes to sharing about his past or his frailties.

In his role as police chaplain, he will be supporting the whole department and says he will assist anyone who wants to pray or just talk. “Along with the detectives, I will be there to encourage and comfort the recorders and dispatchers. People don’t realize the trauma people in these positions go through. I’m there for the whole team and their wives, too.”

Bradford’s decision to become a chaplain grew from his love for police. “My Uncle Tatum was a police officer in Chicago and I always looked up to him with love and respect.”

Flagstaff Police Chief Dan Musselman calls Bradford’s smile infectious. “Our officers love having Chaplain Bradford minister to them. He comes regularly to do rides alongside them and check in with them. He also attends our police recruit graduations so he can get to know our officers’ significant others and extended families.”

Bradford also is a member of International Association of Chiefs of Police (ICPS), whose goal is to provide emotional, moral and spiritual support to officers, staff and their families.

“I’m excited that Pastor Bradford is here,” said Sgt. Odis Brockman, public information officer.  “He has a lot to offer and our department can benefit from him.”

Church of the Resurrection Founding Pastor Bob Norton started the police department’s chaplaincy program, developed to serve employees as well as other law enforcement agencies and the Flagstaff community. Some of the duties include assisting with death notices, responding to major disasters as a liaison with relief agencies, visiting sick or injured personnel at home or in the hospital and providing Critical Incident Stress Management.

Chaplains also provide immediate confidential, personal and family counseling within the framework of non-denominational spiritual guidance to any law enforcement office, firefighter or their families.

Along with Bradford, Chaplain Todd Lindquist and Chaplain Stan Syfert are joining the program.

“Chaplain Nathaniel’s strong personal faith has been cultivated through real life experiences. Coupled with his winsome personality, this makes him a strong asset to the Flagstaff Police Department,” said Lindquist.

“He is very gregarious and outgoing, and has the perfect personality for the job,” said Syfert.

Bradford and his wife, Cindy, have been married for 41 years. They moved to Flagstaff in 2011. “I was operations manager for Cemex, a leading supplier of concrete and building materials and was not serving as a pastor at the time,” said Bradford. “My employees worked hard and many times would come and pour their hearts out to me. I was their boss and manager and I cared for them.”

Cindy says her husband loves the work of ministry and is excited about joining the Flagstaff PD team. “We respect those on the front lines serving our country; this is one way of giving back to them.”

My mentor was my stepfather, who passed away several years ago. He taught me all about hard work and going the extra mile.

MY WISH FOR THE WORLD

My holiday wishes for the world would be salvation of all nations and God’s continued protection of His Covenant people, Israel.

“Be not overcome by evil, but overcome evil with good.” Romans 12:21

I would be a storm chaser.

THE ACTOR WHO WOULD PLAY ME

When they make a movie about me, I would like to have Denzel Washington play me. FBN