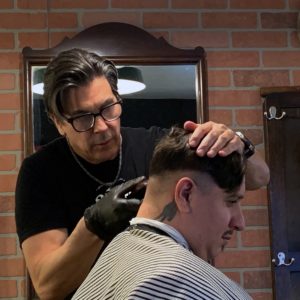 His hands reach for scissors and comb as naturally as an artist reaches for brush and pigments.

His canvas for creativity is the hair on a client’s head.

Meet Val – Senor Alberto Valenzuela, who is called “Val” by almost everyone.

His studio is Val’s Workshop on South San Francisco Street, a cozy, private, single-chair barbershop for men and women.

The barber’s menu of services is concise: Haircuts, hair straightening, and beard, bang and neck trims. Services are billed as “Quality haircuts, hassle-free,” with affordable prices, and a focus on reaching out to students at the nearby Northern Arizona University.

“They’re all really good kids around here,” Valenzuela, 55, commented on his student clientele. “I get so much support from these guys. They all have roommates, so the word gets around. I would never open up a place if I weren’t next to a college.”

Val’s Workshop opened two years ago and business has been steadily building.

“It’s been entertaining to say the least, my two years here,” he said. “This is my first year it really took off.”

The Val’s Workshop website not only allows for the booking of appointments, but also displays avant garde graphics and images portraying the quirky, retro decor of his store.

The site also proclaims the image he strives to project: “…Val has successfully merged his cutting edge training and urban philosophy with the laid back energy of the West Coast to create a unique blend of ‘life and style.’”

Valenzuela came to Flagstaff five years ago, with high hopes and a deep resume of haircutting experience.

His mother and father are in the restaurant business, having owned an Italian fine-dining establishment, Vittorio’s, in Mexico for 35 years.

Valenzuela was born in Los Angeles but moved when he was 2 with his family to Guadalajara, Mexico, until he was about 10, when they moved back to the United States to live in San Diego.

His family operated Mexican restaurants in La Jolla, a seaside community within the city of San Diego.

“I waited on tables for him,” he said of his father. “I didn’t want to work for my father for the rest or my life. He told me to join the military, and I had to listen to him.”

Also, at 19, the young man was getting into trouble, and his father knew he wasn’t saving any money.

“I was a little bit out of hand; I was a rebel,” he recalled. “Every night, my buddies and I would go out. It was not your picture-perfect set up.”

Fortuitously, there was a cosmetology school two doors down from the recruiting headquarters that Valenzuela visited to appease his father.

“I didn’t let them cut me a deal,” he explained. “I did not want to join the military. I walked into the beauty college – it was a godsend. The whole 8-to-5 thing really straightened me out.”

Just before closing on a workday, customer Alex Gomez was getting a very carefully composed haircut. Gomez, a local chef, has been a regular at Val’s Workshop from the day it opened.

He comes every four weeks.

His daughter, Dafne, 14, who was waiting for her dad in a tiny adjacent game room, also comes to Val’s for her haircuts.

Squeezing in without an appointment, a last customer, Chris Allender, who works at NAU, knocked on the door for a quick trim.

Allender first met Valenzuela at another salon in town.

“He just took more care than anyone ever had,” he said. “Val seemed different, in a great way. Then, I heard from staff at NAU that he had opened his own place.”

The road to Flagstaff was long and circuitous. After graduating from cosmetology school in 1982, Valenzuela moved to Los Angeles.

“I wanted to learn from people who had been in the industry for a while,” he said. “Beverly Hills and Westwood, I lived a few years there, then I went to New York City, the East Village, then Berkeley, Telegraph Avenue, for two years.”

Returning to Mexico in the mid-80s, he lived in Polanco, an affluent area of Mexico City.

“It’s like the Beverly Hills of Mexico,” he said. “You can walk into a shop and cut hair. You don’t need a license.”

He also ended up in the southern Mexican state of Oaxaca, where he lived on the beach.

“Have Scissors – Will Travel; I cut hair on the beach for $10 a person,” he remembered. “Over there it’s good money.”

A bit of a vagabond, and with long hair, Valenzuela also traveled across America in a Volkswagen van.

“That was my time to reflect,” he noted.

Reflection led to opening “The Workshop,” his own hair salon in San Diego, then a partnership in a “Cut & Games” business where young people could get a haircut while they played video games.

Eventually cashing out of his partnership enabled him to finance a new direction.

“I didn’t know where I was going to go,” he said. “I was looking for a college town. I wanted a small town where I could feel at peace.”

After picking up a magazine, he read an article about “50 Places to Live in America.”

“I see Arizona, and I see Flagstaff,” he said. “I see trees, bars and the college. Flagstaff worked out to be the place. I took a road trip directly here.”

He lived in a motel for two days, then found a room on Craigslist.

“I roomed with three college students,” he said with a laugh. “I could have been their dad.”

Valenzuela finally locks his main side door from the inside. The workday is over, well past his posted closing time.

Business has been so healthy that the barber is in the process of opening a second workshop on West Route 66.

“We’re opening across the street from the Galaxy Diner,” he said. “We’ll have a membership card.”

Currently, he is recruiting local stylists and barbers to provide expanded staffing at the new location.

Valenzuela said he still plans to “definitely” be cutting hair out of his beloved blue building near campus.

He recently married one of his clients, Sarah Jang, who he had known in San Diego.

“I had been doing her hair for 14 years, then she found me in Flagstaff through an old employee,” he said. “I always had a crush on her.”

Jang is a jewelry designer who also teaches yoga at Yoga Revolution, just up the street from Val’s Workshop. The two were married in Las Vegas in March last year, and his large Mexican/Italian family came to celebrate.

“My whole family meets at casino resorts every year,” he said. “We told them we were getting married in Vegas, and they said, ‘Oh, we’re coming!’” FBN