You are here: Home / Business / Why the Minimum Wage Increase is Complicated 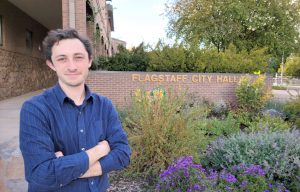 Employers will pay more and may have to work harder to recruit and retain employees.

“In 2016, voters passed Proposition 414, or The Minimum Wage Act, creating this office to enforce and implement the City of Flagstaff minimum wage,” said the labor standards expert.

“Since doing the calculation is a different mechanism than before, we have to do a lot more education now so businesses can prepare for the 2023 minimum wage increase,” said the Flagstaff High School graduate, who returned to his hometown from Phoenix in May 2021 to run the newly-created City Office of Labor.

“Getting out of Phoenix in May is always nice,” he said with a smile. “I came from a job where I worked for the Secretary of State in elections, which gave me background in legal language. I’m not an attorney, but I know when to check with an attorney. Our goal in this office is to give business owners every chance to get their businesses in order,” Rhode said.

Many Flagstaff businesses are already prepared for the increased minimum wage. “Our finance department has already sent out messaging that the paperwork is done and is ready for January deployment,” said Terra Lehr, general manager of the new High Country Motor Lodge.

The new boutique hotel will also implement bonuses for perfect attendance to encourage stability and teamwork. “Most of our departments enjoy the benefits of a bonus structure or a tip program that would put them over the minimum wage,” she said. “In addition, after 90 days, employees get health, dental, vision and life insurance and can contribute to a 401K.”

She says the business strives to think creatively to keep employees incentivized. “We want them to love to come to work with the environment we create here.”

High Country Motor Lodge (HCML) is part of Classic Hotels & Resorts. The Arizona corporation operates over half a dozen boutique hotels in Scottsdale and Carmel-by-the-Sea, among other vacation destinations. HCML employees can stay at these luxury accommodations at a reduced rate. “It’s a great benefit that they can stay at the beach for $75 a night,” said Lehr.

HCML’s efforts demonstrate the compression effect of the minimum wage increase. Wage/salary compression “occurs when there is little difference in pay between employees regardless of differences in their respective knowledge, skills, experience or abilities,” according to Insperity, a recognized professional employer organization.

So, as a result of the minimum wage increase, employers may find that they not only need to prepare for the rise in pay, but also need to look for ways to incentivize and up the earning potential of employees.

“When employers increase the wage for the entry-level positions, they have to adjust salaries for the upper levels to be equitable across the board. Otherwise, they will lose their management or senior-level people,” said Flagstaff City Councilmember Regina Salas. “There is a wage distortion when you increase the minimum wage.”

Salas pointed out that the minimum wage increase also increases the business contribution to social security, workers’ compensation and other benefits. “Those increases are absorbed by the employer and not the worker. What I’ve seen in the last year as we face the new normal is businesses across the board struggle to recruit and retain employees, even in manufacturing. I also see a trend that restaurants have limited their hours and reduced staffing, and I see staff working three roles: bartending, busing and hosting.”

Salas added that Flagstaff is experiencing increases in prices and worker shortages. “Yet, even at the city, we adjusted for compression and still have 30% vacancy on city jobs.”

For the first time, the City Office of Labor will add Navajo language documents to the English and Spanish workplace posters produced to communicate minimum wage changes. In addition, public outreach campaigns, using radio, print and social media, will run in all three languages from mid-December through January.

“We try to take an approach to work with businesses as much as we can,” Rhode said. He urges any employer or employee who needs more information to contact him at 928-213-2071 or visit laborstandards@flagstaffaz.gov. FBN