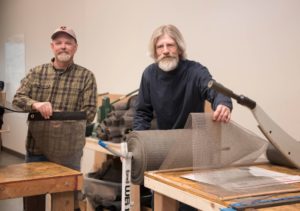 On a hot day in the Grand Canyon many years ago, Jim Bell was sitting under a tree watching a squirrel systematically defeat the food protection system he had positioned on a far branch of a tree. The animal easily passed through the barriers and proceeded to chew through the sack to the food.

The incident inspired Bell to create the Ratsack Cache Storage Bag. Made of lightweight stainless steel mesh, it makes it nearly impossible for gnawing critters like mice, squirrel, raccoons and ring-tailed cats to chew their way through to food and supplies.

Bell notes that the system is not entirely bear-proof, but then again, “neither is your vehicle.”

The Ratsack got glowing reviews from backcountry rangers at the Grand Canyon, Bell said, where they were considered a better alternative than the “ammo cans” often used at campsites like Phantom Ranch. Having a system that was more reliable would help with park cleanup and deter animals that often become dependent on the trash of campers.

With that positive reception, Bell and his partner, Tom Monroe, founded Armored Outdoor Gear, Inc. in Flagstaff in 2002 to produce and sell the handcrafted items. Bell said that while the company has stayed in business for 15 years and has even had some major commercial successes (the product was picked up by REI in 2012 after a seven-year evaluation), it has always been a sideline. Bell and Monroe always had to rely on other work to support their families.

Then they heard about Moonshot, a rigorous program at the Northern Arizona Center for Entrepreneurship and Technology that puts entrepreneurs and their businesses through a rigorous four-track process to build their market, attract investors and accelerate growth.

Bell and Monroe decided to pitch their business to Moonshot, and were among the first businesses and entrepreneurs accepted into the new program. Bell said he is excited about the prospects of growing his business under the Moonshot model.

“It increases the probability of success because of the networking opportunities and is a very nice facility,” Bell said, referring to NACET’s incubator and accelerator at its Gemini Drive campus.

Bell and Monroe will have new products to work with as they go through the Moonshot program, including a 30-gallon version of the product that can be used for large-scale storage or as a trash receptacle. The products would be ideal for regular campsites and car camping, Bell said. They are also producing stainless-steel mesh bags for venues such as sporting events, music festivals and schools.