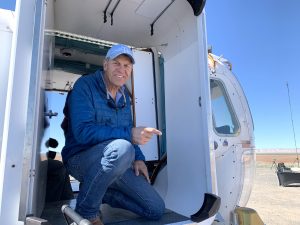 On land commonly occupied by Hereford cattle, pronghorn antelope and mule deer, a moon rover prototype cruises at a top speed of eight miles per hour near Black Point Lava Flow. It is here on Babbitt Ranches that NASA, Japan’s space program, JAXA, U.S. Geological Survey scientists, along with engineers and technicians, set up a space camp of sorts. They have been preparing for the Artemis Missions to the moon, with the first launch window for the un-crewed Artemis 1 rocket opening Nov. 14.

“The next one [Artemis 2] will have crew on it orbiting around the moon and then Artemis 3 will bring humans back to the surface,” said USGS geologist and astronaut trainer Lauren Edgar. “But there are many more Artemis Missions that are planned, including having a ‘Lunar Gateway,’ a space station that will be in orbit around the moon, and a pressurized rover that will enable the crew to go much further from the lander.

That pressurized rover is about the size of a tank or small RV. The cockpit has two pilot seats, where each astronaut can control the vehicle using a joystick device. Benches behind the seats fold down into beds with a toilet located between them. The 12 wheels underneath can turn 90 degrees to make the rover go sideways. The rover takes on rocks and small boulders with ease, climbs up and down hills and can turn in a complete circle. Last month, astronauts from NASA and JAXA spent two and a half days at a time inside the vehicle.

“They were having dehydrated food, which would be equivalent to a lot of the dehydrated food being used on the Space Station right now,” said Edgar. “Everyone said it worked out pretty well. They were very comfortable for the time that they spent in there and I’m glad we had the chance to test it out.”

“It’s really exciting to be back out here on the Babbitt property,” said Desert RATS Mission Manager Barbara Janoiko. “The last time we were here for a Desert RATS mission was in 2011. They’ve been real supporters of our testing this year as well as in the past. It’s also really exciting that what we’re doing out here – developing the pressurized rover requirements – plays a small piece in the Artemis Missions.”

The Artemis 3 Mission is being planned for 2025 or 2026, with a landing at the lunar South Pole where the sun shines at a very low angle and creates long shadows. To simulate the conditions, the Babbitt land provides the rocky lunar-like terrain while the Desert RATS team has brought in a big spotlight, or “portable sun,” to practice drills with at night. “The biggest challenge,” said Janoiko, “is trying to understand how to operate in this low-lighting condition with these different natural conditions and what you can see and explore in that type of environment.”

“There’s a lot of great science that can be done at the lunar South Pole,” said Edgar. “We expect there to be volatiles, potentially water ice, in some of the permanently shadowed regions there and that could be a really good resource for future exploration. It’s also a good chance to go to this part of the moon that we’ve never explored before to better understand the moon’s formation and evolution and to sample some geologic units that are really old and reveal information about the impact-cratering history. One of the really cool things about the moon is it’s really been this witness plate to everything that we’ve experienced here on the Earth, but maybe we don’t have a record of that anymore because of plate tectonics on Earth that have actively destroyed some of those earlier records.”

Although the specific landing site has not been identified yet, NASA recently announced 13 different regions of interest at the lunar South Pole. “Right now the planetary science community is working to understand those areas in more detail including the geology and minerology, the potential hazards that might exist and the challenging lighting conditions. In terms of what the terrain might look like, there are some really big old impact craters in that area. We don’t necessarily intend to see lava flows because that terrain has just been pummeled over and over again by impact craters over time, so it’s going to be a lot of loose fluffy regolith probably.”

As a scientist inspired by the Apollo Missions, Edgar calls it a huge honor to be part of the process. “It is a privilege to be at this point in human history. And it’s even more special to be connected to some of those who might be making those first steps. I can just say from the astronauts I’ve worked with, the future of space exploration is in great hands.”

Also inspiring, says Cordasco, is a land stewardship philosophy intended to travel with the astronauts. “Together with the USGS and NASA, we want to promote the idea that the land-use ethic we practice here on Babbitt Ranches be extended to form our ideals in space,” he said.

“We have land ethics here on the Babbitt property that we maintain and then we’re going to carry that forward as we explore future destinations in our solar system,” said Janoiko.

USGS geologist Jim Skinner is one of the key forces behind developing a statement that honors the use of land wherever humans travel. “It’s a way to have everyone understand that we are taking care of the land, whether we are on private land, like Babbitt Ranches, or on the moon or other worlds,” he said. “We want to always be respectful and that goes beyond the ground itself, it includes the critters and the biota. That’s something we will be working on over the next year.”

A draft statement suggests a personal and professional commitment “to help maintain the integrity of the land as we take this next step off of our world and onto another.”

“We want to ensure that those who follow will have the same lands here and beyond available to them for their own stewardship, use and exploration,” said Cordasco. FBN

For drone video of the moon rover rolling across Babbitt Ranches north of Flagstaff by LightForce Media and a more in-depth interview with astronaut trainer Lauren Edgar, go to Zonie Living at StarWorldWideNetworks.com.