You are here: Home / Archives for u s geological survey 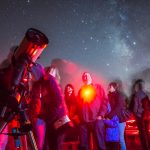 With more than 20 telescopes and hosts from across the region, the free annual Flagstaff Star Party is offering three nights of stargazing into Northern Arizona’s starry autumn nights, along with rich presentations tapping into the global cultural wealth of our night sky heritage. The world’s most … END_OF_DOCUMENT_TOKEN_TO_BE_REPLACED

During the 1960s and 1970s, two companies called Arkla Exploration and the Duval Corporation explored Northern Arizona for potash in the Holbrook Basin by drilling over 100 holes. The Holbrook Salt Basin is a project area that rests approximately seven miles east of Holbrook, Arizona. A report was … END_OF_DOCUMENT_TOKEN_TO_BE_REPLACED