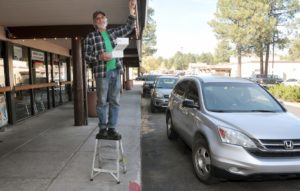 For more than two decades, residents and visitors, including students hovering over books and cramming for exams, have sipped cups of steaming coffee and tea, spooned hot soup and crunched into sandwiches at Campus Coffee Bean.

This local hangout with its hipster vibe has just become mainstream modern with the launch of mobile ordering and curbside pick-up service using a new mobile application through FlyBuy Technologies, a Seattle-based startup based in Pioneer Square.

Pick-up service at Campus Coffee Bean is provided at the Red Zone curb outside the coffee shop at its South Milton Road location near Northern Arizona University.

“For those on the go, we are very excited to offer our customers curbside pick-up,” said Roger Pisacano, Campus Coffee Bean owner. “Just pull up into the Red Zone in front of our store and let us bring your order out!”

The FlyBuy app is currently offered in more than 70 restaurants and coffee shops in Seattle, Portland, Minneapolis, Houston and St. Louis.

“There’s only one in Arizona so far, but it’s all over the country, and this is the perfect location, too,” Pisacano said. “People can just line up here, and I can have three cars at a time.”

A native of New York City, Pisacano, 62, relocated to Flagstaff in 1994 and started Campus Coffee Bean in 1996.

He comes from a family of entrepreneurs.

“I’ve always had my own business,” Pisacano said. “My dad was in business. My grandfather had his own wholesale fruit and produce business; we’d deliver into Manhattan.”

Starting in mid-October, Campus Coffee Bean become the first store in Flagstaff to offer a “virtual drive-thru,” thus beating to the punch large chains like Starbucks and McDonald’s.

“It’s a quiet start,” observed Pisacano, on the fourth day of operation. “I thought it would be a really, really good idea myself, but I’ve been wrong many times. It’s an app; it pops up and we track it with our iPad through beeps. We can actually see them drive here. It lets us track them and know when they’re here, with a constant beep when they drive up.”

Although it is free to customers, FlyBuy gets a small percentage from each sale, Pisacano said. “No charge at all; we absorb it,” he added.

Use of the app eliminates the need for restaurants to build an expensive, physical drive-thru. It also is a benefit for parents with young children and people trying to avoid the lunch rush, as they no longer need to find parking or leave their cars.

“I think it’s a good idea,” he said. “There’s so many gimmicks out there, it’s hard to choose which one.”

It was his idea to approach the technology company, Pisacano noted, and Campus Coffee Bean became FlyBuy’s first college-town location.

“They were our first location in Arizona,” explained FlyBuy CEO Wil Merritt. “It was clear talking to Roger Pisacano, the owner, that he ‘got’ the concept of FlyBuy’s ‘virtual drive-thru’ and would be a great partner. I believe Roger had seen an article about FlyBuy in the restaurant industry trade press.”

FlyBuy Technologies started about four years ago with the mission of changing the takeout industry by providing any restaurant the ability to be a “mobile” drive-thru. The research and development stage tested this technology platform on a variety of users, including restaurants, dry cleaners and auto parts delivery.

Merritt, who has been with the company for about a year, said the founder is Will Rademaker.

“He came up with the idea one evening when he tried to pick up a quick takeout meal on his way to an event,” Merritt explained. “He was frustrated by having to search for parking, then stand in line to order, then wait for the food to be prepared. The light bulb went off that there had to be a better way.”

According to a press release, FlyBuy is planning on expanding to other local favorites in the coming months and is welcoming suggestions from community members in Flagstaff about restaurants they would like to see on the app.

At Campus Coffee Bean, employees are already busy bringing out to the Red Zone any items from the Campus Coffee Bean menu, including favorites like breakfast burritos, soup of the day, croissants, bagels, pancakes and sandwiches like the Mars Hill with roasted turkey breast, basil pesto and provolone cheese.

Pisacano and his wife have a daughter in high school and another in college. He says he is excited about providing this new expanded service to Flagstaff.

“I love it out here,” he said. “It’s got everything. If you enjoy the outdoors, which I love, I couldn’t think of a better place to be.” FBN

Photo caption: Roger Pisacano and the folks at Campus Coffee Bean will run your spicy chai and anything else they serve out to you when you order through the Flyby mobile app.