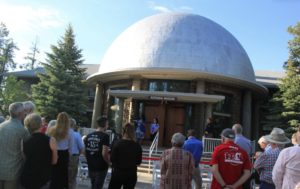 It is the place where Pluto was discovered, but began out of an obsessive interest in Mars.

On May 28, 1894, Percival Lowell arrived in Flagstaff, Arizona Territory, to commence astronomical studies. This marked the official opening of Lowell Observatory, the first scientific establishment in Arizona and home of one of America’s most storied astronomical observatories. To celebrate its 125th anniversary, the observatory hosted a ceremony on June 6, attended by government officials, scientists and space fans of all ages.

Percival Lowell established his observatory initially to study Mars and the possibility of intelligent life there. He transcended science into pop culture by writing several popular books and lecturing widely. His provocative ideas triggered much discussion and debate – both within and outside of scientific circles – about extraterrestrial life.

This standard set by Lowell to pursue scientific studies and share the wonder and awe of space with the public led to the observatory’s dual mission of research and education. Lowell Director Jeff Hall says it can really be boiled down to “communicating science. That is really what we do, whether through our excellent research program or when we welcome guests to our visitor program.”

Today, scientists at Lowell use a variety of ground- and space-based instruments for research – including the observatory’s flagship Discovery Channel Telescope, one of the most versatile telescopes in the world. Meanwhile, more than 100,000 visitors come each year. This fall, the observatory will open the Giovale Open Deck Observatory, the first stage of a multi-year master plan that will greatly increase the observatory’s educational reach.

The observatory also has played a leading role in dark sky protection, with Lowell astronomers urging the Flagstaff City Council to create a lighting ordinance in 1958 – the first in the world.

In a proclamation recognizing Lowell’s importance to the Flagstaff community, Mayor Coral Evans stated, “In 200,1 the International Dark-Sky Association named Flagstaff the world’s first International Dark Sky City, with IDA Executive Director David Crawford commenting, ‘No other city or town has shown such an overall commitment to protecting the quality of its dark skies, not only for the observatories, but for all the citizens of Northern Arizona.’”

In recognition of Lowell’s heritage of science, education, culture and history, the observatory was designated a Registered National Historic Landmark by the National Park Service in 1965 and identified as an Arizona Treasure in 2005 by Governor Janet Napolitano; included in 1999 by First Lady Hillary Clinton in her Save America’s Treasures program; and named by Time magazine in 2011 as one of “The World’s 100 Most Important Places.”

In addition to all its accomplishments and accolades, the observatory is in the top five reasons why people visit Flagstaff.

“Lowell Observatory plays a huge part in why people have chosen to ‘Visit. Discover. Grow.’ in our community,” said City of Flagstaff Economic Vitality Director Heidi Hansen. “Many visitors have included the observatory in their itineraries from having read about the work performed and the discoveries made. These visits have helped us turn many visitors’ stays into a lifetime. Lowell truly helps to enhance the overall quality of life in Flagstaff.” FBN