You are here: Home / Local News / Celebrating the Arizona Trail: A Dream Forged from History, Friendship and a Passion for the Outdoors 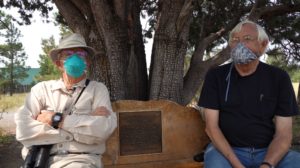 In the shade of a thriving alligator juniper tree in Buffalo Park on a sunny August day, Dr. John Hildebrand and historian Jim Babbitt sat on a polished rock bench dedicated to their friend, Dale Shewalter, founder of the Arizona Trail, and reminisced about the journey since the ‘70s when the trail was just a dream being pondered over mountain passages and dining room tables.

“Dale and I hiked around together and did some hiking on the [San Francisco] Peaks,” recalled Dr. Hildebrand, a longtime Flagstaff general surgeon, avid hiker and expert birder. “The one thing specifically that I remember doing in the late ‘70s was flagging the Kachina Trail across the south side of the Peaks. There was no trail then.”

Babbitt, who returned to his hometown of Flagstaff in the early ‘80s, quickly became friends with the hiking pals. “Long-distance hiking in those days wasn’t anywhere near as popular of a thing to do as it is now,” he explained. “I remember going to your house, John, and having all these rolled-up maps. Dale would get them out and unroll them and we’d look for hours at these topographic maps of various segments of the trail. You could just tell that Dale had this idea that was burning inside of him for making the trail. So, we got on board. It sounded like a fabulous idea to us!”

The vision was a trail for hikers, equestrians and bicyclists (outside wilderness areas) that would stretch from north to south, border to border from Utah to Mexico, across Arizona’s wild, rugged and scenic lands. The trio identified routes across National Forests and National Parks, but there was only one way to get from the San Francisco Peaks to the Grand Canyon, and that was through private land: Babbitt Ranches’ CO Bar Ranch.

The Babbitt section followed the historic Flagstaff to the Grand Canyon Stagecoach Line route that carried tourists from Flagstaff to the Grand Canyon for $20 in the late 1800s. “Horse-drawn carriages would take six to eight people at a time,” said Babbitt. “They’d pick them up at The McMillan hotel at Leroux and Santa Fe Ave. and take them to Grandview Point at the South Rim.”

“Twenty dollars was a lot of money then and most people didn’t have a lot of money, but I think there were serious travelers who wanted to go to the Grand Canyon, and for years, that was the only way to get there,” said Hildebrand.

The trip included three stops where the team of horses was changed out. One of those stops was on Babbitt Ranches’ Cedar Ranch. “For the horses to drink out of the spring, they got big old pine trees, carved them out and lined them up in a series coming down from the spring. And, that’s how they moved the water,” said Babbitt.

In the book “Grand Cañon,” one traveler described the stagecoach ride:

It was only eleven hours in duration, and not only was most of the route level, but two-thirds of it lay through a section of beautifully rolling land, diversified with open glades and thousands upon thousands of tall pines and cedars entirely free from undergrowth. It is no exaggeration to say that we drove that day for miles at a time over a road carpeted with pine needles. The truth is, Arizona though usually considered a treeless and rainless country, possesses some remarkable exceptions; and the region near Flagstaff not only abounds in stately pines, but is at certain seasons visited by rainstorms which keep it fresh and beautiful.

Keeping Up with Dale

“We didn’t hike so much with Dale because he was doing mostly long hikes east and west across the Mogollon Rim in those days,” said Hildebrand.

“Dale was always looking for a first and really spectacular kind of a thing to do. So, he decided he was going to walk/hike the entire length of the Mogollon Rim, from the White Mountains over to the Aubrey Cliffs or somewhere over by Seligman,” said Babbitt.

A beloved Flagstaff schoolteacher, Shewalter would take month-long blocks of time during summer break to complete segments of his Mogollon Rim trek. “Finally, in the early ‘80s, he completed that walk and it was monumental for most hikers that I knew at that time, a real feat,” said Babbitt. “But also, at that time, he, John and I took some pretty interesting long hikes that were pretty unknown. One particular one was going across Munds Mountain and Lee Mountain and the big notch that actually disconnects those two mountains and then down off into Sedona, into Jacks Canyon. It was just a fabulous hike.”

The three shared their knowledge of Arizona’s topography and little-known paths as they continued to envision and chart out what would become the extensive trail. Hildebrand’s favorite was on the west side of the Peaks where the climb rewarded hikers with thick groves of aspen. Babbitt had fond childhood memories of exploring the wildland around Ashurst Lake and enjoying the spectacular view over Lake Mary.

By the 1990s, Babbitt Ranches President and General Manager Billy Cordasco and his son, Caleb, were crafting wooden Arizona Trail signs in their garage, using a branding iron to mark the posts.

“The ranches were very cooperative, very receptive and very supportive of the whole concept. As they still are today,” said Babbitt. “The Ranches Board of Directors, primarily family members, were monitoring this whole Arizona Trail project and our participation in it very closely and very enthusiastically. They were very glad to see the recreational component, and then when it was finally completed, everybody had a big celebration. It was a big deal for Babbitt Ranches and for the board to be a partner in all of this.”

On Saturday, April 20, 1996, Cordasco and Shewalter were digging holes and posting the handmade signs along the former stagecoach route, some 30 miles north of Flagstaff. “The CO Bar section is all ready to go,” Cordasco told newspaper reporter Lukas Velush. “It’s all on existing roads and trails.”

In that moment, Shewalter delighted in seeing his dream become a reality, piece by piece. “This has been a long time coming,” he told the Arizona Daily Sun. Cordasco explained the signs would keep hikers on track amidst the tangle of ranch roads and trails. “People, when they’re in the middle of nowhere, need to know where they are going,” he said.

Shewalter died after a battle with cancer in 2010, but not before he saw the Arizona Trail completed. Hildebrand and Babbitt miss their friend and visit with him on his bench under the alligator juniper about outdoor adventures of days gone by.

“He was a nice, friendly person, a popular teacher and a real gentleman who so loved the out-of-doors,” said Hildebrand.

“I think he would have hiked every day if he could have,” said Babbitt.

The two credit Shewalter with the vision and the passion that drove the creation of the Arizona National Scenic Trail, as it is known today. “We were just consultants,” said Hildebrand with a chuckle.

On Aug. 1, a small group of hikers, volunteers, Coconino County officials, representatives from the Arizona Trail Association (ATA) and Babbitt Ranches celebrated the completed transformation of a portion of the Babbitt Ranch Passage, from a two-track dirt road to a 13-mile single-track stretch, rich in history and a friendship that deepened over mountains, maps and dining room tables. FBN

For information about the Arizona Trail, visit www.aztrail.org