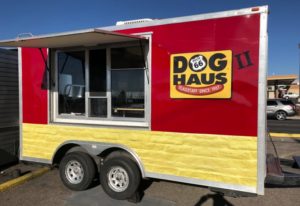 One of Flagstaff’s favorite comfort foods recently became even easier to find. The Route 66 Dog Haus has gone mobile. The trailer addition will offer the same popular fare as the restaurant, from the fried bologna sandwiches to the breakfast burritos.

Named Dog Haus II, it will not be hard to spot, because it is painted the same red and yellow as the restaurant itself.

Bill Unkovich bought the brick and mortar business about two years ago and decided to take it in a new direction.

“The trailer is an extension of our business,” he said.

He realized that there were few places to eat downtown after 9 or 10 p.m.

“We think we can provide a service. We thought we could get some food in their stomachs,” Unkovich said.

The building, a historic landmark, was built as a Der Wienersnitzel in 1960. When the original owner decided to step away, she sold it to a gentleman who had it for the next 44 years. When he decided to retire, Unkovich, with no restaurant experience, decided to buy it.

“I had no restaurant experience, but I had a lot of eating experience,” he said with a chuckle.

He says his reputation is built on comfort food that makes people smile. “It is a very popular restaurant and it is doing very well. People come in here and they are happy. We have people who come in here three or four days a week.”

The most popular menu items are breakfast burritos and chili dogs. Local favorites also include the ribeye steak sandwiches and Chicago dogs.

He says the trailer is growing in popularity, too. “We have it parked on a very busy corner when we are not using it. People keep asking where it is going to be next.”

Dog Haus II Co-Manager Paige Shafor has brought it to three events so far. “People are really excited to see us out and about in Flagstaff,” she said. “And because it is painted the same colors as the restaurant, they know it’s us.”

Dog Haus II offers all the usual favorites. “It is available for private parties, sporting events, at lunchtime for businesses, block parties, birthday parties and some people want to rent us for grad parties. I think the sky is the limit,” Unkovich said.

Hear more at FBN’s On the Grid podcast, FlagstaffBusinessNews.com. FBN