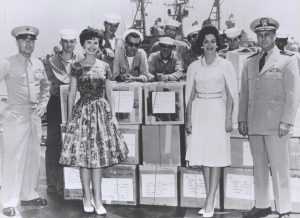 Beneath the beautifully stylish exterior of interior designer and entrepreneur Jill Babb, founder of Changes, is a fierce warrior for children. For nearly two decades, she, her husband, Bill, founder of Babb Financial Group, and a small army of local volunteers have hosted some of Flagstaff’s most lavish galas, called on celebrities and signed up business leaders to amplify the voices of children suffering around the world and in our neighborhoods. This month, Jill gives thanks for what appears to be the dawning of the Childhelp “Speak Up Be Safe” program in the Flagstaff Public School District, after her nearly  decade-long crusade to bring the nationwide initiative to Northern Arizona.

“I believe Speak Up Be Safe is one of the most important things Childhelp does,” she says. “It empowers kids. We know that one of the most important things for these kids is to know that what is happening to them is not normal. A lot of times children think that everyone is having the same experience in their homes and that it is normal. By putting the program in the schools, we are teaching kids at an early age that certain areas on their bodies should not be touched, that this is not a good thing and that what’s happening to them is not ok.”

The Babbs were made aware of the horrific realities many children face when they met their Flagstaff neighbors Sara O’Meara and Yvonne Fedderson, Hollywood actresses, USO (United Service Organizations) entertainers and Childhelp founders.

“When I first found out about Childhelp, it just broke my heart,” said Jill. “When you talk to the ladies one on one, you hear stories that go way beyond what you can read about in details and everything. And, I thought, ‘I have to do something because I had such a wonderful childhood. I have to give back.’”

Jill started the Childhelp Flagstaff Chapter nearly 20 years ago and has been leading the charge to create a Childhelp Advocacy Center here as well. In conversations with FUSD, she received the verbal support she needed this year for Speak Up Be Safe to be taught in kindergarten through sixth grade classrooms, but she would have to find the $15,000 needed to run the program. She did. A friend contributed $10,000 and Jill, after receiving an inheritance from her father, believed that this is where he would like to see her use the money. She donated the remaining $5,000. As a result, she is hopeful Speak Up Be Safe will be in the Flagstaff Public Schools in the New Year. “We also hope to incorporate it into charter schools,” she said.

Actresses Yvonne Fedderson and Sara O’Meara first met on the television set of “The Adventures of Ozzie and Harriet,” where they were working in the 1950s. “Yvonne and I kept running into each other and then ended up rooming together in an apartment and also we were Sunday school teachers at the same church,” said Sara. “And then we were chosen to go on this trip that changed our lives forever.”

That trip was overseas to Southeast Asia. The two were chosen out of hundreds of applicants to entertain U.S. troops through the USO. “The soldiers were wonderful. They were so respectful and so nice,” said Sara. “The general who met with us after we were chosen said, ‘Now girls, I want you to know the reason we’ve chosen you is not because you’re such great actresses or because you’re so beautiful, but it’s because you’re the girl-next-door type. We want them [the soldiers] to know what American girls are really like, waiting for them to get back home.’”

Finding themselves holed up for days in their Tokyo hotel room during a typhoon in 1959, the women decided to venture into town. “We were not supposed to go out, but Yvonne and I were so bored, so we decided to sneak out through the basement steps.”

The young women came across 11 children, ages 2 to 10, huddled together. “They were hugging under a fallen awning and their knuckles were cracked and bleeding form the cold. They didn’t have shoes and they tried to get under our big coats because we had great big camel hair coats. We tried to ask them where they belonged,” said Sara.

“Where’s your mamasan, where’s your papasan? That’s about as much as we could say,” said Yvonne. “And, they kept saying, ‘No mamsans, no papasans.’ And we thought, ‘Why are they here? Something must have happened to their parents.’”

“So we snuck up back to our hotel room through those basement steps and gave them a hot bath and fed them,” continued Sara. “A colonel was assigned to us to travel to Korea, Okanagan and Japan and we told him we had these children in our room. And he had a fit.”

The colonel gave the women a list of orphanages, but the facilities were already overcrowded because the typhoon had left many children without parents. “They had to make room for those children and they turned out half-American/half-Japanese children, which these ended up being,” said Sara. “We didn’t know they were known as ‘throwaways’ that nobody wanted. These were children without a country. They did not have a birth certificate.”

The women snuck them back to their hotel and started their pursuit for a home for them again the next day. “Because we learned they were half-American/half-Japanese, it gave us the fortitude to reapproach the colonel and say, ‘We still have these children. These are our children. We’re not going to turn them out. You have to help us in some way.”

The colonel sent them to the director of Tokyo Gospel Missions, who was also half- American/half-Japanese. “He said, ‘Nobody has ever stopped to take care of these children, but I’m going to give you the name of a woman that will take them in, that has a hut.’”

Sara and Yvonne learned “Mama Kin,” was already caring for 10 children. “We talked her into taking our 11, promising her we would take care of all 21 children if she would take them because we had a show to do that night and we had to leave them some place,” said Sara.

“We didn’t know what we were going to do with them,” said Yvonne.

“Mama Kin turned out to be the most fabulous, wonderful Christian woman,” said Sara. “We stopped the show that night and we said, ‘Some of these children might be yours and you have to help us. And we’re going to pass the hat. And we need you to come with lumber and build on the front door and window panes and expand this little two-room hut. And they showed up en masse the next day with stolen army blankets and lumber and doors and windows.”

“They were fabulous,” added Yvonne.

Word spread and more orphans showed up at Mama Kin’s door. “We had over 100 children entrusted in our care before we ever came back home and that’s when we began International Orphans Incorporated,” said Sara.

“We got our friends together to help to fundraise so that we could raise the money to build more buildings for the children,” said Yvonne. When the women returned to Tokyo, they built four new orphanages.

But in 1975, they received what they felt was a death notice for the children. General Lewis William Walt, who worked with them and had been a frequent guest at their fundraising events in the U.S., took the women aside at one of their galas and said, ‘Ladies, don’t send any more money over. The President’s going to say any day for me to pull out our troops and the money will land in the Vietcong’s hands. And the children probably will be killed,’” said Sara. “We called the next day and said, ‘You have asked us to go in and save these children and now they’re all going to be slaughtered. You have to help us get airplanes in there to get these children out.’ And that was the beginning of Operation Baby Lift.”

Seats were removed from the planes to make room for boxes to carry some of the children who were just infants. The women brought thousands and thousands of children to the United States, despite the tragic crash of the very first Operation Baby Lift plane that took off from Vietnam. “Speaking so well of the Americans who opened their hearts, every single child was adopted by the time they reached our soil,” said Sara.

“Hundreds of volunteers were helping us take the babies from the planes,” said Yvonne. “It was so emotional. It was really, I think, the most emotional thing that we ever went through. But it was very exciting to have these children here and safe and then to be adopted.”

Operation Baby Lift ignited a movement of compassion across the U.S. The ladies were asked to speak at events. At one such event in Los Angeles, they shared the stage with the new California governor, Governor Ronald Reagan and his wife, Nancy. Nancy stopped the women as they were going to their seats and said, “‘You’re just the two to do it,’” recalled Sara. “And we said, ‘Do what?’ and she said, ‘Child abuse in this country. The laws are protecting the perpetrator, not the child. You must do something about it and you two are the ones who can because you have dealt with an unpopular war and have succeeded. You have dealt with unpopular issues and succeeded. And this is a very unpopular issue and we would like for you to begin the main thrust of letting people know what’s happening to the children right here in our country.’ And we thought she was crazy because nobody had any idea about child abuse.”

The women said they would have to do a feasibility study before taking on such a campaign. “Nancy looked at Ronny and she said, ‘I think they can get that money, don’t you, Ronny?’ And she winked. And the next day she had a check delivered from them for us to start a feasibility study. We had a lot of research to do before we went to Washington D.C. to help change the laws, which, we were successful.”

That effort became Childhelp. The Reagans continued to support the nonprofit organization from that point on.

Sara and Yvonne created a television special, “A Time for Love,” which raised awareness and more funds and demonstrated ways to rehabilitate abused children. They built the first residential treatment facility for abused children in California 45 years ago.

Today, Childhelp has A Children’s Village U.S.A. in California and Virginia and A Childhelp Children’s Center in Tennessee. Sara and Yvonne say the need continues as child abuse increased during the pandemic. Calls to the Childhelp hotline rose by 43%. That hotline number is 1-800-4-A-CHILD or 1-800-422-4453.

In Phoenix, the Childhelp founders will host a gala on Saturday, Feb. 18, as fundraising event to help children around the world. Information can be found at Childhelp.org

In June, Jill and the Childhelp Flagstaff Chapter will resume its live annual fundraiser, “25 Men Who Think They Can Cook,” which had more than 650 attendees at its pre-pandemic event. Organizers hope to continue to raise money for a Childhelp Advocacy Center.

“You cannot dispute that we all need to raise funds to help children,” said Jill, a member of the Childhelp National Board of Directors. “They are the future of our world and when they are damaged and hurt, they just carry that with them until we can help them. Helping kids through programs like Speak Up Be Safe is going to make for a better generation.” FBN