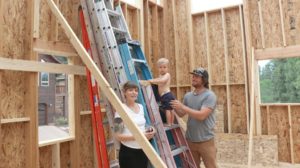 Caleb and Rachel Waters live in a 550-square-foot house. With a nearly two-year-old son and a second baby on the way, their new Flagstaff home will bring some much-needed space.

“We could have purchased a 1970s home and spent $100,000 in renovations, but it made more sense to build our own sustainable house,” said Rachel, a museum conservator.

Caleb is no stranger to building. As a maintenance mechanic supervisor for the National Park Service, he oversees construction, buildings, roads and utilities for the three Flagstaff-area national monuments.

“I hadn’t planned on doing so much of the work myself but it has been hard to find the necessary subcontractors, so I started to take on more responsibility,” said Caleb, who described local construction workers as much busier than in recent years.

Through May of this year, the City of Flagstaff has issued 104 permits for single-family units, up from 79 this time last year.

For Coconino County year to date, 81 single-family permits have been issued, compared to 59 through June of 2016.

Caleb said an owner-builder project makes sense in today’s competitive local construction market because of the difficulty finding contractors who can commit to the work. He said he has been fortunate to hire Brian McLean of Huckleberry Woodworks, someone with a lot of experience and attention to detail.

For the architectural phase of the project, Caleb and Rachel hired UPDESIGN, owned by Anne and Trevor Soper.

“It has been a good project because Brian is a great builder and because Caleb is so keen on the performance side of it,” said Anne, referring to the home’s energy efficiency.

Both Anne and Trevor studied architecture at the University of Arizona, where curriculum favors modern sustainable building, the theme of the Waters’s home. Their firm’s current projects range from traditional construction, a cottage-style house in Forest Highlands, to modern, sustainable mountain homes.

For UPDESIGN, moving beyond the Great Recession has been a blessing.

“While we are still happy to do a garage addition or build mother-in-law units, we’re now seeing people who want more design-oriented work, including energy efficient designs,” said Anne, the company’s principal architect.

The nature of Flagstaff seems to be changing, too, from Anne’s perspective. She’s noticed more buyers in their 30s and 40s who have sophisticated tastes.

Along with this shifting clientele, Anne said Flagstaff’s construction prices are higher than many other places.

Part of the reason for Flagstaff’s higher construction costs is the landscape. Many of the undeveloped lots in Flagstaff have steep slopes and rock issues, which drive up costs, said HomeCo Lumber and Hardware owner Mike Brackin.

“There is still quite a bit of private land available, but it is not affordable,” said Brackin, whose father established HomeCo in 1975. Mike took over operations in 1986.

As longtime providers of building materials, the Brackins have had a close-up view of Flagstaff construction trends. 2017 is turning out to be a strong year for remodeling, in addition to new home projects.

Mike Brackin said a driver of new construction in Flagstaff is the limited inventory of homes for sale.

And while the Flagstaff summer construction season may seem notably active, Brackin said business has not returned to pre-recession levels.

“We are up 75 percent from the low period [of the recession],” Brackin said. “If we have a couple more good growth years and the economy stays strong, we could be back to where we were in three to four years.”

In the meantime, Brackin said he loves creating a positive work culture and serving his hometown, including working with customers like Caleb and Rachel Waters. FBN

Construction 1 & 2) Rachel and Caleb Waters, with son, Raleigh, are building a home near downtown Flagstaff.

Construction3) Anne and Trevor Soper own UPDESIGN Studio in Flagstaff.

Following Happy Trails: On Leadership and Life
Cultivating a Milkweed Movement for Monarchs