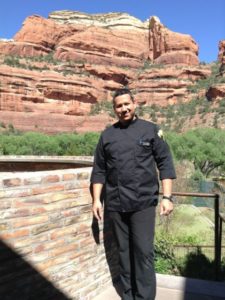 Before dedicating himself to the culinary arts, Executive Chef Jose Martinez thought about leaving his native Puerto Rico to set up a business devoted to distributing one of the simplest but irreplaceable foodstuffs. “This business had nothing to do with cooking,” he said, sitting in a booth at Che Ah Chi, one of the food service entities he now helps oversee at Sedona’s Enchantment Resort.

“I wanted to sell ice on a small island because any time I went there to camp, I could never find ice.” However, his plan ran aground due to a justified parental veto. “My dad said, ‘You’re not gonna do that. I just got the keys to a restaurant and signed the lease,’” Martinez recalled. “I said ‘Okay, let’s go!’ I was 19. It was a small place, very tiny, but I’ll tell you, the minute we started cranking food out of the kitchen, I just fell in love with it. And the rest is history.”

Born into a family that included restaurateurs, “Chef Jose” points to his mother’s baking as an initial engine for his gastronomical passion. “From early on, I was on a pastry adventure.” While attending culinary school in Puerto Rico, he was recruited by a culinary school in Florida and was stateside three months later.

“The idea was to go to the United States and come back, [but] I never left. This is the best nation in the world.” Though his career path has crisscrossed the country – with top gigs at luxury resorts such as The Broadmoor in Colorado Springs, The Roosevelt New Orleans and Phoenix’s Arizona Biltmore – Martinez connected most with the Grand Canyon State. “I never felt as good as when I was here. To me, this is like I’m home,” he said. “Obviously, it’s a different town, smaller than Phoenix, but the scenery makes up for all of that. I’ve adjusted well.”

After last year’s “IrMaria” devastation, which included landfall by both hurricanes near his hometown of Fajardo on the east end of Puerto Rico, the father of three asked his family to join him in his adopted hometown until living conditions returned to normal. “But living there is all they know even though it’s not what it should be at this point. But they find a way to make it happen. All is well. They’re doing okay, but they’re stubborn!”

Easter Sunday was Chef Jose’s second day on the job at Enchantment Resort and he found the brunch “incredible” because of its quality and variety of offerings (approximately 100 items). Now, as he orchestrates an equally impressive effort for Mother’s Day (Sunday, May 13), an even-more critical and fundamental task is afoot: team building. “I love food but you can’t get to the point of good food, and you won’t be able to put your best foot forward, until you build a team where you’ve earned their trust and they’ll do everything they can for you,” said Martinez. “Building a team is the most gratifying time in a resort, in a work environment.”

What’s your favorite dish to prepare? To eat?

“I like a lot of things, as you might expect. I like the fancy stuff, the foie gras and all of this. But to be completely honest with you, the dish that really hits the spot for me is nachos! If you break it down and think about the perfect dish, you need great flavor, a contrast of textures – crispy, soft – and I think that nachos encompass all of that. It’s not fancy, it’s not something you see in a Michelin three-star restaurant, but whenever I need something that’s going to hit the spot and get me going, it’s the dish for me. To prepare, I would say I enjoy Hispanic cuisine in general because of the bold flavors and creating that perfect dish. One of the greatest dishes that I like to prepare is from back home. It’s a plantain mash with shrimp creole and pork rinds [or mofongo with shrimp creole]. Oh my! That dish to me is enjoyable to prepare and eat.”

Is there any place you would love to visit?

“I’ve never been to Europe, so I would like to visit one day. France, Italy and Spain, those three. The cuisine there is something that I admire and I would like to see the real thing.”

Who do you admire the most in the culinary world?

“I admire [famed chef and restaurateur] Thomas Keller. I really do, just because of what he’s been able to do. He’s an inspiration for me when it comes to food and wine.”

What do you do to relax?

“Golf! Aside from family time, golf. I do three things in life: I’m either working, with my family or golfing. I haven’t yet gotten out on the course here but I’ve heard that Seven Canyons is an amazing golf course so I’m looking forward to that. So, that’s essentially my triangle, the balance of my life. Golf started for me in Florida. A friend kept inviting me to play and I thought it was a sport for boring people. The first time I played, I left the course and spent about a thousand bucks on golf clubs and gear because I was hooked!”

When was the last you laughed really hard?

“I was laughing hard the other day at something my kids said. I can’t remember what it was exactly but I was laughing!” FBN