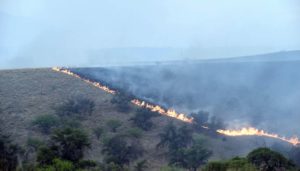 Severe weather has wreaked havoc with winemakers on both sides of the Atlantic this spring. As adjusting with the elements is a staple of agriculture, Arizona winemakers and aficionados anxiously watched destructive flames approach Sonoita, the state’s oldest continuous viticultural area located south of Tucson. Meanwhile, Sonoita-Elgin, its counterpart in France’s Bordeaux and Burgundy regions, was taking extreme measures to keep vineyards warm through the night, fighting off the worst frost events since 1991 with up to 60 percent of French vineyards at least partly affected.

Setting hay bales on fire overnight was common, and estates that could afford it had helicopters hover over their vines all night to keep air circulating. And as the copper state’s high-altitude vineyards also experienced with temperatures near freezing, parts of Burgundy’s famous Chardonnay-producing region, Chablis, even resorted to a most delicate technique whereby vines are purposely coated with ice so they remain above freezing (think of the igloo effect).

In the world-famous Bordeaux region, extreme frost events are less common than in Burgundy and other more northern and less coastal wine-producing areas. But this year, Bordeaux’s Right Bank (eastern parts) experienced devastating frost, including the famous wine hamlets of Saint-Emilion and Pomerol, killing this year’s new growth in many areas.

Jan Thienpont, president of the Francs-Cotes de Bordeaux appellation (or winemaking sub region), decides what emergency agricultural and financial measures will be allowed this year. He and his counterparts have released a dire set of emergency measures, including various types of indemnities and subsidies, permission to buy grapes for other local vineyards but with constraints on how the wine can be marketed, and simpler processes for laying off workers. Thienpont remains optimistic that tackling this season’s issues fits with long-term changes to Bordeaux’s winemaking protocols motivated by a desire for increased environmental stewardship and sustainability. “Despite the challenges, we remain devoted to what I call the “green revolution” in Bordeaux and in my appellation,” he said.

Arizona suffered from similar but much less catastrophic frost events this year, fueled by the same early spring, warm temperatures and soils primed by a wet winter. That same wet winter has also spawned more brush and grass that can feed wildfires, like the Sawmill Fire that threatened Sonoita. Jeff Hendricks, co-owner of the Clarkdale-based winery Chateau Tumbleweed and an experienced vineyard manager in Northern and Southeastern Arizona, knows these concerns all too well. “In Arizona, bud burst occurs in late March through early April and frost dangers are said to be over between May first to the 15th depending on how optimistic you are,” said Hendricks, who also served as vineyard manager for Cornville’s Page Springs Cellars. “Spring frosts are a huge concern for newly established vineyards especially. In a young vineyard, the defoliation of a frost event can cause death. In mature plants, the danger is fruit loss and not usually mortality. Once every 10 years or so, you have a catastrophic frost that wipes out a sizable portion of the fruit load (50 percent or more), but your typical frost event is a much smaller percentage loss. For the 10 years I’ve farmed here, I’ve never seen a completely frost-free spring. At best, there are still a dozen plants or so that get nipped.”

During his tenure in Arizona, Hendricks has had to resort to the radical solutions to which France’s vintners recently resorted. “For your typical inversion frost event, frost moves from above and slides over the topography like molasses. It moves slowly and it seems like the only time damage occurs is when it settles in a pocket, valley or wash for a sustained period. Hillside vineyards see much less risk. Tarps, barriers, fans and fires can help with these events. Barriers are a good way to divert the slow-moving frost for local problem areas. Advection events will destroy any vines, hillside or not. Fans and barriers won’t help. The entire air mass in the area drops to below freezing. This is when heaters or fire will save you. We do a fire every 40 feet in a grid and keep the fires burning low. We did this a dozen or so times for Page Springs. We’d be up all night feeding fires but in all cases, we saved much of the crop.”

Ironically, in June 2016, Page Springs Cellars was threatened by a quick moving brush fire that sparked on an adjacent empty property. All local firefighters were called and the blaze extinguished before any vines or property were damaged.

And while a few tales of wildfires near vineyards have happy endings – such as Southeastern Arizona’s 2011 vintage that yielded some interestingly smoke-tainted red wines – most are terrifying ordeals that put enormous stress on people and the places they tirelessly steward. “Increasing wildfires in the area are a huge concern,” Hendricks added. “A fire close to a vineyard cluster could potentially wipe out an entire vintage across a huge swath.”

Like Hendricks, Thienpont’s hardest job is mitigating and dealing with nature’s curveballs, but his leadership role in Bordeaux also makes him an optimistic cheerleader for the industry. “Despite the frost, life goes on!” Only vintners who make ice wine, whereby very late-harvest grapes need to freeze on the vine, might argue that statement. FBN