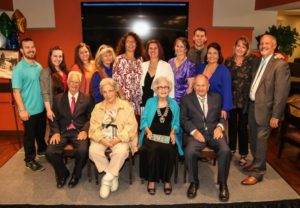 Members of the Sechrist family joined in a Flagstaff Medical Center celebration on Thursday, Sept. 29, that honored the late Charles W. Sechrist, M.D., who started the hospital as a 25-bed facility 80 years ago with just two physicians.

“It was nothing short of a miracle. My grandparents arrived here in 1928. Seven years later, they started a hospital while running a practice,” said Charles “Chuck” Sechrist, a Northern Arizona Healthcare pharmacist. He told the gathering he started his career at FMC in middle school, planting the garden with his grandmother.

FMC Chief of Staff Michael Glover, M.D., shared FMC’s highlights, including when the hospital became the first in Arizona outside of Phoenix and Tucson to perform open-heart surgery in 2004. “Six years later, FMC reached a milestone of 1,000 open heart surgeries,” he said. “In the last 10 years, the hospital has continued to expand services, from computer assisted surgical navigation and robotic surgery to intensive care units staffed by a full-time team of intensive care physicians that has significantly elevated the acuity level of care FMC can provide.”

Northern Arizona Healthcare President and CEO Robert Thames, F.A.C.H.E., F.H.F.M.A., said the hospital strives to be the choice for patients in the region. “FMC continues to look for ways to make health care more accessible and affordable.”

“It has always amazed me about the things we do here at our little hospital on the hill. It’s rewarding from a physician’s perspective,” said Dr. Glover. “We owe it to the vision of those few pioneering physicians like Dr. Sechrist all those years ago.” FBN

Did you know Oct. 19 is BRA Day?
Good Posture: The Key to Health and Wellness