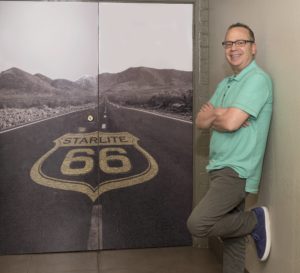 Ron Getto has two Ivy League college degrees and has spent 22 years on Wall Street. So, one might wonder, what brought the Starlite Lanes owner to Flagstaff?

His career path has not been smooth. In fact, there were some pretty big bumps along the way.

Getto was born and raised in New York. He attended Columbia University as an undergrad and a graduate student in its business school.

In 1986, he pursued a career on Wall Street, which he described as “spectacular.”

He was happy there until the crash of 2008 when he lost his job.

“They said goodbye,” he said. “I had only two jobs in 22 years, but when the crisis came there were just not enough seats for everyone anymore.”

He said he initially looked for another job on Wall Street.

“I couldn’t find one,” he said. “Where I have ended up is bizarre. I wouldn’t have believed it.”

The little book, “Who Moved My Cheese” by Spence Johnson, helped him change his perspective. It’s about the experience of mice who live in a maze that always had cheese at a particular location. One day, the cheese is moved and the mice must find the cheese at a new location.

“I worked on Wall Street for 22 years. The cheese was there every day. I grew fat, along with all my fellow mice. One day, the cheese wasn’t there. I went back every day looking for the cheese,” Getto said. It still was not there.

He soon realized he had to do something else.

“I decided I was going to buy a business. I understood what a good business looked like.”

He looked at franchises and other opportunities, but then someone mentioned bowling to him.

“I don’t know anything about bowling. I began to research I and discovered a it is a favorite pastime and that people have been bowling since Egyptian times.”

He figured that bowling would be a great business for many reasons, including the fact that it fills a social need and there were tremendous operating margins. Plus, Starlite Lanes was the only bowling alley in Flagstaff.

Bowling alleys had been disappearing at an amazing rate and were being replaced by big box stores. Still, bowling remained a popular sport.

Getto says he did a tremendous amount of due diligence. He attended trade shows and answered an ad in a bowling magazine for a facility for sale in Texas. “The broker said he had just listed one in Flagstaff, Arizona. I said, ‘Send me the information and I will take a look at it.’ That was in August of 2010.”

“I never imagined I would find my cheese in a bowling alley,” he said.

He bought Starlite as a fixer upper and has spent the last six years doing that. He has just about finished the project. Now, he wants to spend more time with Four Peaks Wealth Management, which he co-founded a few years ago.

“We recently merged with Sedona Sterling Financial Services. We are just beginning the integration process.”

Getto says the mission of the merger is to facilitate a deeper relationship with existing clients.

In his spare time, he shares his financial experience with others by mentoring business owners and public speaking.

He has been mentoring Jonathan Netzky, the owner of Tepa Burger, a manufacturer of plant-based items, like veggie burgers, for commercial food services.

“His background in New York and finance gives him a more worldly view than you can get in Flagstaff,” said Netzky. “At the same time, he has a strong financial background. Ron really understands money.”

Getto also does guest lectures at Northern Arizona University in the W.A. Franke College of Business. “I speak about finance. That is where I met my Wealth Management business partner, Matt Haertzen.”

In addition, he writes a regular column in a bowling trade magazine about wealth management for bowling centers.

Getto said his life since moving to Flagstaff has changed for the better, so has the life of his wife of 26 years, Karen, who is graduating from NAU in May. They have two daughters, ages 19 and 23. The empty nesters just adopted a German Shepherd puppy, Thea.

Another aspect of Getto’s life is giving back.

“We support not-for-profits by doing fundraising here in the bowling alley.”

“I have one motivation and it’s all about doing the right thing.”

Who is your role model and why?

“Warren Buffet has shaped my professional career from business school to this very day. I share his investment philosophy.”

What advice would you give someone who wants to own his or her own business?

“You can never do enough due diligence before writing that check. Be sure your skill sets are complementary to the business you are pursuing.”

“It was the Orpheum Theater at a concert with my wife.”

“Any corner pizzeria in New York City. You can’t beat New York Pizza by the slice. I subscribe to ‘Pizza Today.’ No one is more a pizza snob than me.”

What do you do for fun?

“One thing that has changed in my life is that I was introduced to yoga five years ago. For fun? I work for fun. I love what I do. Why shouldn’t work be fun if you love what you do?”

3 Responses to Ron Getto—Cleaning Up the Strikes