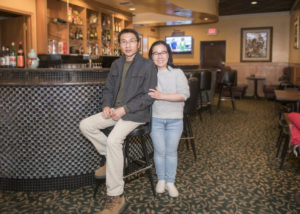 It had been at least 12 years since Kevan Hegg dropped into Golden Dragon for lunch, but upon urging from a friend and news that the restaurant had new ownership, he thought he would give it another try.

“The place was buzzing with good energy,” said Hegg, of Hensley Beverage Company. “Most tables were taken and the phone was ringing off the hook with orders.”

The first thing Hegg noticed was the full-service bar. “They have four taps, Sierra Nevada, Lumberyard Red (local), Blue Moon and Sapporo, as well as a variety of bottle options.”

As it turned out, Hegg’s favorite dish, Snowpea Chicken, was not listed on the menu. “The waiter said, ‘No problem,’ and made it special order with crisp veggies. The flavors were on point as was their Hot and Sour soup, also one of my favorites. I definitely plan on coming back.”

Owners Jen Zhen and Dennis Liu acquired Golden Dragon last May. The young couple with two children wanted to run their own business and live in a smaller community. “We knew Flagstaff was a beautiful town and had a good tourism industry. We were living in Phoenix and wanted less stress so we moved here and purchased the restaurant.”

Zhen’s experience into the restaurant industry started as a child when she worked in restaurants with her family. She was born in Shaanxi and Liu was born in Guangdong, China.

Incorporating a lot of heart into their dishes is what Zhen says makes her dishes taste better. “We kept the main chef who has been here for six years and hired other chefs. Our food is prepared fresh and very carefully.” Zhen emphasizes the importance of a clean kitchen.

Patrons can view the kitchen from the dining room via a large window that showcases the large woks atop blazing flames and steaming food.

The new owner of Cunningham’s Flooring (located a few doors down), Diane Smith, had lunch with a friend at Golden Dragon a couple of months ago. “The food was excellent and noticeably better than when we ate there before,” she said.  “I had the chicken fried rice and vegetable chow mein; it was excellent and I was very impressed.”

“We added more authentic Chinese options to the menu as well as gluten-free, vegetarian and less oil,” said Zhen. “Our flavors are traditional Chinese with a fusion of Cantonese and Szechuan – very different from American Chinese food. We also expanded our dessert menu. We really want to listen to our customers’ reviews so we can try to make it much better.”

“I love my job here,” said Shawn Bragg, a server who moved to Flagstaff from Sacramento. “Jen and Dennis are very good employers and they take really good care of us. We get a lot of good comments about the food; people say we never let them down. It’s the best Chinese food I’ve ever had.”

Zhen said they will probably keep the same décor for a while, but do plan to designate a room for parties and business events.

Although the history of Golden Dragon is hard to pin down, Russ Lyon realtor Sharan Winnicki remembers the restaurant being here when she moved to Flagstaff in 1976. “I’m not sure, but it seems it was like it’s been around as long as Grand Canyon Café. With all the changes the town has gone through, it [Golden Dragon] has always been a physical staple to Flagstaff. It’s nice to see they have new ownership.”

Some of the best-selling menu items are orange chicken, Mongolian beef and spicy kung pao. They also serve Peking duck, which Zhen says is hard to find.