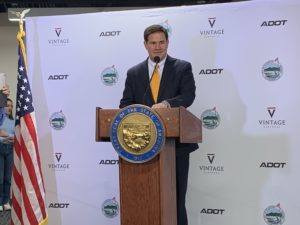 A first-time visit to Flagstaff’s spacious new Arizona Department of Transportation office might take motorists by surprise. There are 14 service windows and lines that move. More impressive is the back story, a public-private partnership and adaptive reuse project that is creating much-needed office space for ADOT, benefits to Harkins Theater, which moved to the town’s east side, new life for the Flagstaff Mall and The Marketplace, and a long-awaited road alignment at the gateway to the city.

On Feb. 14, Arizona Governor Doug Ducey, local elected officials and community and business leaders celebrated the grand opening of the ADOT building, which now houses the Motor Vehicle Division in the former Harkins Theater on Woodlands Village Blvd., and is one piece of a complicated economic development puzzle.

Walter Crutchfield of Vintage Partners, a Phoenix development group, welcomed the gathering, saying, “This has never been done.” Crutchfield is credited as the businessman with the vision, creativity and tenacity to put the deal together. He said the multifaceted project took seven years to complete, including four years to have the legal documents in order, “which paved the way for the opportunity for private industry and government to do amazing things.”

Greater Flagstaff Chamber of Commerce President and CEO Julie Pastrick said the project’s economic impact is estimated to result in $200 million for the area in the next few years. She praised Crutchfield. “Thank you for what you brought to Flagstaff.”

ADOT Director John Halikowski said the innovative public-private partnership that involved the state, the City of Flagstaff and Vintage Partners, has given ADOT the opportunity to centralize operations under one roof. “That’s important to the agency, but more important for the community.”

He spoke of the complexity of the project that included land swaps and a major renovation of the movie theater by Wespac Construction. “We’re going to drive out fear and deliver new ideas.”

Halikowski also reminded those in attendance to get their Arizona Travel IDs before October.

Flagstaff Mayor Coral Evans acknowledged the vision and dedication for the project, which she says is assisting in the redevelopment of east Flagstaff, and will realign University Ave. and Beulah Blvd., create a dedicated bus land and pedestrian underpass. “This is clearly designed with Flagstaff values.”

In addition, Mayor Evans praised Crutchfield for his involvement in the community, including his participation in the Greater Flagstaff Chamber of Commerce and support for the Boys and Girls Club. “His company delivered more than we ever expected,” she said of Vintage Partners. “Typically, public agencies assume all the risk. They took a risk on the project and this community. And we are so glad they did.”

Councilmember Jamie Whelan attended the event and toured the new facility. “To have that vision of, ‘I’m going to move a business over here, I’m going to take this under-funded place and make it beautiful and put these people in it from ADOT and then I’m going to create the entrance to Flagstaff,’ that’s a big responsibility, that’s Walter Crutchfield really, with the ability to vision and to bring those entities together. The bumps along the way were handled well. We all just stuck together and worked for it. Each entity came out a winner.”

“Arizona does government differently,” said Governor Doug Ducey. “This is an example of that, with an innovative partnership and a state-of-the-art facility.” He called the project good for the environment, and one that will result in better service for every ADOT customer. FBN