You are here: Home / Sedona / Grounding in Sedona 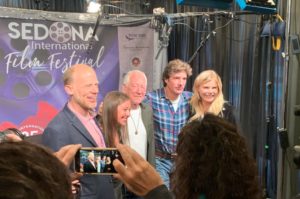 Mariel Hemingway walked barefoot through the forest, Mackenzie Philips comforted those recovering from addiction and Ed Asner reflected on a life of standing up for what he believes. The actors joined filmmakers, production crew members, film buffs, locals and visitors for the 25th annual Sedona International Film Festival.

Organizers rolled out the red carpet for the silver anniversary as more than 900 hotel rooms, 2,000 meals and seven after parties were made available and local businesses welcomed the influx of movie patrons. More than 177 films were highlighted, from Oscar-nominated documentaries to narrative features, narrative short films, documentary short films and animated shorts from Feb. 23 to March 3.

Hemingway joined directors, producers and writers to promote their documentary “Down to Earth: The Remarkable Science of Grounding.” Grounding or “earthing” means connecting one’s body to the earth to restore electromagnetic balance. Scientists, doctors and researchers in the film say this act restores and maintains optimal health.

Grounding pioneer and author Clint Ober, a retired cable TV executive who grounded electrical charges for a living, has researched the healing power of the earth’s negative-charged ions for more than a decade. “The human body is primarily electrical,” he says in a YouTube video on earthing. “Our brain, our muscles, our heartbeat, our thought. Everything in our body is electrical first, chemical second. And so, when we’re standing on the earth, we feel better because our body is electrically stable.”

On Saturday, May 1, in Sedona, he stated in a news conference, “When you stand barefoot on the earth, your whole body becomes slightly negatively charged. You can’t have inflammation in a negatively-charged object.”

Ober says he started wondering about the power of the earth’s electrical charges 22 years ago when lived in Sedona and was working with art galleries on lighting. He had chronic pain from his life as a cowboy, skier and tennis player, so he decided to experiment on himself. Using a strip of electrical tape in his bed and a wire – one end attached to his big toe, the other buried in the soil – he made a powerful discovery. He slept for the first time in years without the use of Advil.

Since that time, Ober has financed a dozen studies on grounding, research that has been peer viewed and documented in science and medical journals. He says, when connected to human skin, the earth’s negative charge reduces inflammation, thins the blood, regulates sleep, balances hormones and decreases the recovery time for injuries. He notes that the prevalence of rubber-soled shoes and wall-to-wall carpet in homes contribute to a human disconnection from the ground’s electrical charge.

Ober’s science states that when humans are in direct contact with the earth, we absorb negative electrons that help neutralize free radicals in the body that damage cells. Earthing proponents, including doctors and scientists, say grounding increases circulation, which carries away more waste and results in more energy.

Hemingway says she and stuntman Bobby Williams removed their shoes and followed a deer trail into the red rocks of Sedona that morning. “I truly believe nature is our best teacher,” she said, noting that her childhood home life was tumultuous and riddled with mental illness, including seven suicides, addiction, depression, cancer and other diseases in her famous family. “Getting outside was my saving grace. It was how I stayed sane.”

Stuntman Bobby Williams says he and Mariel walk every day. “We walk barefoot. We do about 90 minutes in the mountains every day.”

Williams described a fall from a 30-feet climbing wall onto concrete, which happened five months ago. “I made a mistake. I thought I was tied in. I was not tied in. This foot really got pounded,” he said pointing.

In the accident, Williams tore ligaments and suffered a hairline fracture on the calcaneus bone. Doctors recommended rest and estimated an 18-month recovery period. However, Williams is walking and has been. “I attribute quite a bit of it to barefoot walking.”

Director/producers Josh and Rebecca Tickell shared their personal story, which led to their interest in making the documentary. Rebecca became sick while working on a film about the BP oil spill. She said exposure to the oil made her physically ill. “I had strange symptoms. I had rashes, I had blood in my urine and some other things, but the most disturbing things was the doctors told me I shouldn’t or possibly couldn’t have children.”

Soon after, she had a miscarriage, was pregnant again and gave birth to a daughter with a birth defect. “She was getting unusually sick, a lot. For a couple of years, I would say every other month or so, she would get so sick she would end up in the hospital.”

During that time, the couple started looking at alternative options. A friend introduced them to Ober. She said it sounded too good to be true, that by putting their feet on the ground and connecting to the earth, they could heal their bodies and it would reverse inflammation. “Skeptically, we tried it and we started ‘grounding’ our daughter. She started sleeping through the night. It’s been over a year since we started this practice and we have taken her to the hospital exactly zero times. And that, for us, was totally miraculous.”

Rebecca says her daughter, now four-and-a-half, says, “Mama Earth healed me.” Rebecca believes grounding healed her too. She had suffered from depression and weight gain since she was a teenager. In the last year, she says she stopped getting sick and lost 100 pounds.

For more information about the film, “Down to Earth: The Remarkable Science of Grounding,” visit EarthingMovie.com.