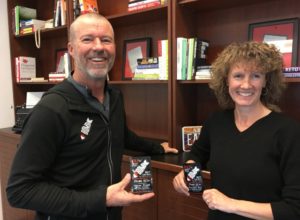 Ross and Kara Taylor, owners of local startup company Love You Foods, have signed a partnership agreement with a major investor, moved the business into a 5,600-square-foot facility in west Flagstaff, and are engaged in conversations with major retailers that are considering dropping the FBomb in their stores.

The FBomb is a high-fat snack made from oils and fats found in foods like coconuts, avocados, olives and nuts.

“In September, we were at a conference called KetoCon, a ketogenic conference down in Austin, Texas, and we met a gentleman there who kept coming around to our booth all day,” said Ross. “He approached us later and said, ‘Hey, I really like what you’re doing. Can I chat with you after the show today?’ We were dead tired, but thought, ‘Okay, maybe another distributor interest or something. Turns out he and his partners had started a supplement company and sold it for a nine-figure, undisclosed sum. They were looking for a food company to invest in and they liked what we were doing.”

In October, the Taylors signed a partnership agreement with Disruptive Enterprises, now the majority interest holder in Love You Foods. Ross says the group brings a commitment to stay in Flagstaff and grow the company. “We just ordered a $200,000 piece of equipment to help us increase our production volume,” he said.

The couple started Love You Foods while working other jobs. “Since the beginning of this year, Kara and I are both full-time. Then we hired our first full-time employee. Now we have a couple of part-time employees. So, we’re up to a staff of five. And I expect we’ll be adding as we get the equipment running here.”

Love You Foods is located at 1650 S. Plaza Way, Suite 2. The Taylors started the company two years ago. “It took us a while to get all the formulations right and figure out who we wanted to source from. And then Oct. 15, 2015, was our first day of sales,” said Ross. “We started in a little 400-square-foot space at NACET, the business incubator site up at Buffalo Park. In the beginning of this year we moved across the parking lot to the accelerator building into a 966-square-foot space. We were expanding and outgrew that space. So, now we’re in a 5,600-square foot space.”

The couple first began creating high fat, low-carb recipes for themselves. Ross was eating healthy fats to prevent type 2 diabetes, which is prevalent in his family.

“All of our products are packaged to be portable and that was a big factor in what we wanted to create because Ross was traveling for work [with Southwest Windpower] and we were trying to make fat to-go for him, basically putting oils in little Ziploc bags and sealing them in Nalgene bottles and it’s just a travel disaster waiting to happen,” said Kara. “And so, we thought, ‘Well maybe other people want what we want.’”

“Your body needs fats,” said Ross. “They are a lubricant and a source of energy. They are called essential fatty acids and you have to have them. Without fats, your body can’t survive. Ketones are the fuel product the body creates from breaking down fats that you eat or fats that you store in your body. Your body thrives on those. Brain function is typically elevated. Body function, especially for endurance athletes, is elevated. So, a keto or ketogenic diet is just eating enough fat and few carbohydrates that you are burning fat as a primary fuel source.”

Kara says customers are dropping the FBomb in smoothies, coffee and salads. “The oils are good for people who are traveling and want to just add good fat to their diet.”

The butters, she says, are made from Macadamia nuts. “They are good snacks for anybody and they’re delicious. We’ve got one that’s just plain Macadamias with sea salt, one that has a little bit of dark chocolate in it and one with coconut. You can just eat them on the go. We don’t add any emulsifiers, so you just squish the packet up, give it a good kneading and then just tear a corner off and eat it right out of the packet. It’s a really handy portable snack. Because of the fat content, they’ll hold you for quite a while. They’ll keep you satisfied.”

Photo caption: Ross and Kara Taylor are fueling up to promote their high-fat FBomb snacks to a larger market.