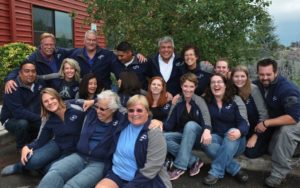 Sometimes things that take a long time to create are well worth the wait. That may be the case for a rat contraceptive with global implications.

ContraPest is the first product developed by SenesTech, a Flagstaff-based biotech company, which offers revolutionary technology to address the proliferation of rats in both urban and agricultural settings.

The milky-white compound, which took a decade to develop, is sweet and attractive to rodents. When eaten by female rats, they become non-reproductive. In addition to cutting egg production in females, when males ingest the compound, sperm development is impaired.

There are no other observable side effects, and the company bills the product as safe, environmentally friendly, as well as a more humane alternative to rat poisons and traps. Conventional rodenticides can take up to 10 days to kill a rat, during which time, the rodent is in extreme discomfort and pain.

Long known to transmit disease and deadly pathogens to people and other species, rats have been the target of pest control since at least the Middle Ages when people used chemicals, plant extracts and even religious incantations and bagpipes to kill them or at least drive them out of cities.

Very good news arrived at SenesTech on April 9 when the Environmental Protection Agency approved the formula for ContraPest, after a wait of about a year. Typical EPA registrations for rodenticides can take between five to seven years.

On the day of the approval, Loretta Mayer, Ph.D., CEO of SenesTech, commented on the special attributes of the bait: ContraPest “has the ability to revolutionize how we control rodent pest populations in the United States by focusing on the root cause of the problem: reproduction. Municipalities are perpetually faced with the constant harm caused by rodent overpopulation, including the transmission of diseases, damage to public infrastructure, as well as destruction and contamination of food supplies.”

She noted that in addition to the more humane aspects of ContraPest for rodents, it also contains no lethal chemicals that can be toxic to humans or other animals in the dosage formulated for rats.

Another scientist, Cheryl Dyer, Ph.D., is co-founder of the company and has worked alongside Mayer during the 10-year struggle to find a successful formula and solution for rodent overpopulation.

At a staff party to celebrate the EPA approval, Mayer said that is was Dyer who first thought of the idea to start the biotech business.

Both avid animal lovers, the two women decided to join their scientific expertise to develop a way to cut rat reproduction safely and humanely.

They received help early on from the City of Flagstaff, which provided space, resources and guidance through the Northern Arizona Center for Emerging Technologies (NACET). The Economic Collaborative of Northern Arizona (ECONA), a regional economic development organization, provided encouragement by promoting SenesTech’s efforts throughout the state.

From the beginning, reducing the rodent threat to worldwide food supplies was also an important part of the company’s mission. An industry magazine, Quality Assurance and Food Safety, estimated that 20 percent of stored food was lost in 2014 because of rodent activity.

Flagstaff resident and longtime business leader, Lavelle McCoy, was involved in the evolution of the biotech company from the beginning.

“As a co-founder of NACET, I was initially introduced to Loretta and Cheryl in early 2007 when they became clients of NACET,” McCoy recalled. “Since that time, I have been a staunch advocate for SenesTech. Early on, I recognized the impact that SenesTech could have presenting a non-poisonous, humane way to control feral animal populations, particularly rats, with a primary goal to reduce the population of rice rats which in turn would increase the production of rice in Southeast Asia; which could, in turn, increase the production of rice to literally feed an additional 500 million people on the planet.” McCoy also commented on the character of the two scientists. “It’s not often that we are presented with the opportunity to play a role in such a dramatic way,” he said. “I am constantly amazed at the sheer energy and will that Loretta and Cheryl exhibit to put SenesTech on the world stage and to make a difference for millions of people, and to think that this happening right here in Flagstaff, Arizona!”

The Federal agency approval clears the way for aggressive production and marketing of ContraPest.

“With this EPA approval, we look forward to working with local, state and federal municipalities, as well as the private sector, to rapidly deploy our revolutionary technology.” Moving toward commercial sale, ContraPest is expected to help to “solve a rodent infestation epidemic, which continues to go unresolved globally,” Mayer added.

“It’s been an awesome privilege to join the support team for SenesTech during their adventures from early emergence to launch,” said Carol Curtis, director of the Coconino County Career Center Department. “We were honored to team up with folks who were determined to make the world a better place, and so focused their hearts, time and energy on realizing that dream. The county invested resources for ‘building blocks’ that matter to a new business: equipment, paying for and securing top-notch trainers for ST team building, leadership development, Lean Manufacturing processes and strategic planning. We covered the costs of interns, offered meeting rooms for board meetings and joined in celebrations when they needed to rejoice or let off steam.”

Curtis said the County Career Center also invested federal workforce dollars that were targeted to increase the productivity of advanced manufacturers in the Flagstaff area.

“The EPA approval is an excellent return on investment,” she said.

Recent tests, ranging from subways in New York, to neighborhoods in Metropolitan Boston and rice fields in Southeast Asia, have yielded promising results, which may lead to the humane control of other pest species, from deer to wild pigs, as well as a non-surgical solution for the spaying and neutering of pets, according to the SenesTech website.

With EPA approval, production has already been stepped up at the extensive SenesTech facilities on the east side of town, with employees being added as well. FBN