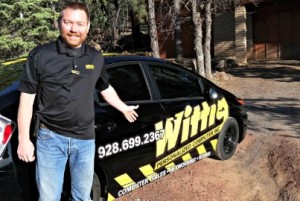 Internet scammers steal millions of dollars from victims nationwide each year, and they are not ignoring rural Arizona. Last month, Sara Bowyer of Munds Park received a phone call from her father. “He told me that he was on his computer, he clicked on something, and his screen went black. Then an urgent message appeared – something like, ‘Alert! Do not turn off your computer, call this phone number immediately.’ I said, ‘Dad, please tell me you didn’t call the phone number.’

“Well, he had called the number and a ‘customer service rep’ answered,” continued Bowyer. “She told him that she couldn’t help him, but would transfer him to someone else. Then, he got transferred to a guy who was in another country. He told my dad that he needed virus protection, which would take 40 minutes to install.” The scammer claimed that he was with Apple Computer and talked Bowyer’s father through how to give him access to the computer.

“My dad could see him clicking and taking over the computer screen. That’s when he called me. I told him to shut his computer down,” she said. But by that time the senior had already given the scammer his credit card number to pay for the $300 “virus protection.”

Dan Wittig of Wittig Personalized Computer reported that he hears of similar “tech support” scams from his Flagstaff clients at the rate of four to six per month. “I am seeing that these scammers not only target seniors, but they are starting to hit Flagstaff businesses as well. In fact, just last week, I got a call from a scammer. They telephoned me on my business phone and said, ‘This is Microsoft, we see that there are viruses coming from your computer. You need to let us onto your computer so we can clean them up.’ I told them, ‘I’m driving down the road right now. Can you give me a phone number so I can call you back when I get to the office?’ Of course, they wouldn’t give me their number – because they were scammers. No legitimate company is going to call you and tell you there are viruses on your computer. If you get such a call, it’s a scam.”

Mike Brower of Prescott Computers says that he, too, has seen a trend in more businesses being attacked by hackers and scammers. “We know of approximately 10 -20 local offices, but most are too embarrassed to report them. Don’t be embarrassed. Turn off your computer and give us a call, or call your trusted tech,” urged the consultant, who has serviced Prescott computers since 2004.

Scammers count on the fact that victims will be too embarrassed to report the con or cancel their credit cards. Bowyer’s father did not want to cancel his credit card. “He fought it. ‘They said they were from Apple,’ he said. But scammers are good – they are going to make it sound legit. When my brother went to his house to take the computer to a reputable Apple location, the scammer called back to try to gain access to the computer again. They were probably looking on his computer for financial information,” Bowyer said. “We told him, it’s not just seniors that the scammers are after – it happened to my brother’s daughter, too. They are preying on people who are in trusting stages of their lives.”

In another Internet con, CryptoLocker, hackers take over your computer and won’t give access until you pay a healthy ransom. “CryptoLocker is a new scam – it’s being changed every day,” explained Brower. “After it gets on your computer, it encrypts all your documents, tax forms and things like that. When you reboot your computer, you get notified that your computer was locked.” Earlier this year, Hollywood Presbyterian Medical Center in Los Angeles was infected by this kind of ransomware. The hacker’s software locked up electronic files and, according to unconfirmed reports, demanded more than $3 million for their return. Fortune magazine later reported that the hospital paid scammers $17,000 to restore access to their electronic medical system.

Other Internet scams come via email or by clicking on a link inside an email message. “Typically, they come from a name that you recognize. You click on it, and it starts loading Malware on your computer. You click on a link that looks innocuous, but it dumps your browser cash. They scan for 16-character numbers, which are your credit card numbers, and the password that usually follows,” explained Brower. Scammers sometimes pretend to be an Internet service provider such as Cable One or CenturyLink.

“The two steps that the user has to take is number one, have a professional look at their computer so that any spyware left behind by the scammers is removed and to make sure that there are no backdoors left behind,” Wittig warned. “A backdoor is a way for someone to get into your computer without you knowing it.”

“Secondly, users should report the scam to the Internet Crime Complaint Center at ic3.gov,” said the computer expert, who has been serving Flagstaff since 1997. “The bottom line is that the FBI is so overrun with complaints that they’ve outsourced their complaint department to a third party. Ic3.com collects the complaints to figure out what is the greatest threat at the current time.”

Wittig recommends that computer users should read what Wikipedia has to say about “malware.” “Educate yourself and see what is going on in the world. Yes, it is going to take you longer than 10 minutes to read. But what is your security worth? Things are changing all the time. All the bad guys are now on the Internet. Getting on the Internet is like hanging out with the bad guys.”

Wittig researches reviews on the best security software. “If you read five or six reviews, you see some of the same names popping up. But you have to pay attention because there are advertisements that make themselves look like reviews,” he said.

“It’s a dangerous time of unbridled greed on the Internet,” cautioned Brower. “It’s the last Wild West – there’s no accountability. You can say whatever you want. It doesn’t have to be true.”

Bowyer continued her story: “Here’s a guy who is 84 years old, who doesn’t know computers very well. He assumes that it is legitimate – that’s what they prey on. What people need to know is that computer companies will not put out an alert like that. Just shut off the computer and take it to a legitimate computer repair specialist. Don’t do anything over the phone.”