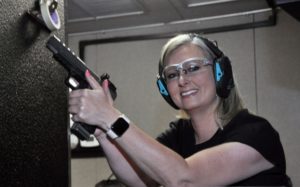 Six months ago, the idea of picking up a pistol and learning to shoot it made Flagstaff resident Julie Street nervous.

Today, Street is so skilled and comfortable with the pistol as her preferred firearm that she has participated in competitive shooting events with the Flagstaff Action Shooters group.

It is handy for Street that her new love for the pistol can be nurtured just down the street from her home at the year-old Timberline Firearms & Training facility.

Outfitted with electronic earmuffs, safety goggles, closed-toed shoes, a holster and pistol, Street comes for pistol practice two or more times a week and slips into one of the 12 shooting lanes in the two bays.

Street grew up in rural East Mesa and rifles and shotguns were part of her childhood experience.

“My parents were hunters, so we just grew up around it, and we ate the food my parents hunted,” Street recalled. “My parents would take us out when we were really little to shoot BB guns to start, and then we got to move into the rifles and shotguns when we were about 10.”

Although shooting is allowed on nearby public land, Street and other shooters are welcoming the convenient, safe and environmentally friendly services offered at the indoor range.

The range is a dream realized for Flagstaff residents Rob and Elise Wilson, whose love of shooting is a shared passion.

Rob Wilson used standard issue firearms in the Navy, where he served for 22 years. He was also a missile technician, “the biggest firearm of them all,” he said.

Elise Wilson has been shooting for 16 years.

“Both Elise and I were involved in competitive sport shooting and realized there wasn’t a good, safe place to practice that, and that was why we decided to open a range,” he said.

The Wilsons both teach at their facility.

“Rob and I are here Sunday and Monday, and we’re working all the time,” Elise Wilson said. “I do mounted cowboy shooting and local competitive shooting with semi-automatic pistols, but mostly I teach, everything from basic pistol classes to conceal-carry classes and private lessons at Timberline.”

Street, whom the Wilsons have called their “best customer,” is one of an ever-growing number of women who are taking up the study of firearms for recreation, but also for protection.

“It wasn’t until January 2019, when I had a situation occur where I felt threatened, that I really started to take learning to protect myself seriously,” Street explained. “I wasn’t going to be a victim, and I didn’t ever want to be in a situation in which I didn’t know how to protect myself or others. I started coming to the range more often, and Elise really helped me with my grip, my breathing and my stance.”

For the Wilsons, the path to opening their range was not smooth at first, with some neighbors expressing concerns about pollution and noise.

To address these concerns, the couple began by recycling all lead and brass ammunition from the indoor range.

Spent bullets can be a major source of contamination in shooting ranges, as well as natural settings where lead poisoning is a threat for both humans and wildlife, such as raptors that may feed on animals that have been shot with lead bullets and left in the field.

“The fewer people there are out in the woods shooting, the better, because some of the folks out in woods don’t respect safety the way we do,” Rob said. “When you shoot in the forest, your bullets stay out there. When you shoot in the range, we recycle 100 percent of the lead and the brass.”

“We have traps that catch all the lead,” he said. “The owners went through a lot to make sure there wouldn’t be contamination. We send all the lead to companies that recycle it.”

Martinez also pointed out the blue pads on the floors in the range area that collect “anything that might be on the bottom of your shoes,” including lead. He noted that the bathrooms are equipped with special de-leading soap so “you don’t take any lead home.”

“They measured the sound outside, and there is less noise [inside] than the highway noise,” Martinez said. “The owners even relocated all the prairie dogs to the Petrified Forest.”

The facility is also equipped with a state-of-the art range ventilation system.

“We bring in outside air, and the air we exhaust back out of the building is actually cleaner than what we brought in, because we filter all the pollen and dust and anything else out that is in the air,” said Rob. “Since we’ve opened, we’ve had absolutely no complaints from anyone. We live in the neighborhood ourselves, so we want to make sure we’re responsible.”

Another advantage of indoor ranges is that they cut back on the trash that some shooters leave in the forests.

“There are a few irresponsible shooters that leave behind a lot of trash,” he said. “They bring things to shoot like propane tanks or fire extinguishers; they’ll shoot it and then just leave it behind.”

In addition, Timberline Firearms is a green facility that captures rainwater for irrigation. It is also equipped with a large solar array that generates more electricity than the facility uses, so the excess is sent back to the power grid.

Some of the visitors to the facility are foreign travelers.

“We get a fair amount of tourists from all over the world, primarily European countries, but also Australia, New Zealand and Asia, who come in and are able to share the freedoms we have in our country,” Rob observed. “Often they are not able to own firearms, and they don’t have shooting ranges they can go to. Our Second Amendment is a right most countries do not extend to their citizens.”

Tracy Cooper, an officer with the Williams Police Department, said it is good to have a place like Timberline Firearms that takes pride in its facility.

“Safety is paramount and it is taken very seriously there,” said Cooper, who frequently practices at the Timberline. “I enjoy being able to train in a controlled environment, to focus on the basics and develop my skills. A firearm is a tool in law enforcement, and it is essential to know how to master that tool. Timberline makes it possible to consistently train.”

For Street, full mastery of the pistol is well within her reach.

“I feel like Timberline Firearms & Training has changed my life,” she said. “I went from being a wife and mom who hunted a couple of times a year to someone who is confident with a pistol. I can clean my own gun, take it apart and put it back together again, feel confident carrying it, and I am aware of my surroundings at all times. I feel empowered.” FBN

2 Responses to Keeping Guns Out of the Woods