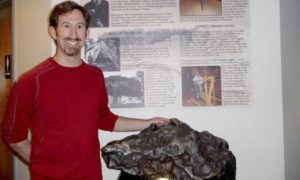 Details about one of the smallest and brightest asteroids ever found are now being released, but perhaps the most significant discovery is how fast astronomers could get “on sky” with telescopes to observe a near-Earth asteroid and assess its impact risk.

2015 TC25, as it is known, hurled past our planet last fall. It was discovered in the night sky by a telescope near Tucson through a project called the Catalina Sky Survey. Within 24 hours, telescopes in New Mexico, Arizona and Hawaii were pointed at the asteroid to better understand it during its fly-by.

“We had a really short window to be able to actually follow up with this object and study it in any meaningful way. And I think that was really one of the remarkable things that we were able to achieve with the study,” said Lowell Observatory astronomer Nick Moskovitz.

Through a sequence of images captured by Lowell’s Discovery Channel Telescope southeast of Flagstaff, astronomers were able to make precise measurements about its elongated shape and other characteristics.

Moskovitz says the six-foot long asteroid reflects about 60 percent of the sunlight that falls on it. Its surface is believed to be similar to rare, highly reflective meteorites called aubrites, which are made up of silicates formed in an oxygen-free environment. Because asteroids are remaining fragments from the formation of the solar system, this information sheds light on what was happening in the universe four-and-a-half billion years ago.

“In this particular case, this asteroid is telling us that there were places in the early solar nebula – the ring of gas and dust that surrounded the young sun – that were very oxygen poor and that’s important because that’s a key benchmark for the conditions in which the planets themselves formed.”

Small near-Earth asteroids such as 2015 TC25 are in the same size range as meteorites that fall to Earth. Astronomers discover them frequently, but not very much is known about them, as they are difficult to see.

“If we can mobilize our resources and have telescopes posed at these objects before they hit, we can provide key information for impact hazard assessment, like the mass and density of these objects, which is pretty crucial for understanding what type of damage would be imparted if the object actually hits. We can provide the proper physical characterization and physical data that will inform any political decisions that might need to be made about, say, evacuating a city or moving people out of the way of an incoming trajectory.”

2015 TC25 came within about 100,000 kilometers from the Earth, which is close in astronomical terms. This is the first time astronomers were able to record optical, infrared and radar data on such a small asteroid. FBN