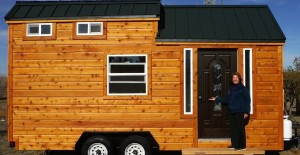 After traveling the world and living in a Buddhist monastery in France for a year, John Baskett decided that he did not really need all his material possessions. Meanwhile, Kristen and Dave Edge were very passionate about being environmentally friendly and sustainable and decided to walk their walk. Both of these households live in Tiny Houses to accommodate their needs for simplicity and sustainability.

Tiny Houses are part of a national movement that advocates living simply in a building that is 400 square feet or less, although many Tiny Houses are much smaller than that. In the United States, average house sizes have grown from 1,780 square feet in 1978 to 2,662 square feet in 2013, despite smaller family sizes. Proponents of the Tiny House Movement cite sustainability, economic independence and green living as reasons to live small.

Baskett, a civil engineer who lives in Flagstaff, recently bought a Tiny House that is 260 square feet, including the loft. He has lived in it for six months. He bought the Tiny House from a local builder on TinyHouseListings.com. Baskett’s shower is made out of recycled redwood, there is a composting toilet, a recycled heater and Baskett only pays $9 a month for his electricity bill.

“I like smaller scale living,” said Baskett. “More than anything, that’s why I wanted to get this, for the simplicity. A Tiny House is like ‘fasting’ from bigger scale living. You realize you don’t need the massive amounts of space that we think we need in this society.”

Kristen Edge and her husband, Dave, live in a Tiny House on land in Parks. Dave

spent 11 months building their 150-square-foot Tiny House, while they lived off Kristen’s Northern Arizona University teaching salary. They have lived in it since February.

“Dave is a geologist. He has no history in construction and learned everything off YouTube,” she said.

The Edges’ Tiny House is built on an 8’ x 20’ trailer with a 10-foot-high ceiling and a sleeping loft. Sixty percent of the materials used in the Tiny House were found reused from Habitat for Humanity or on Craigslist. The Tiny House is entirely off the grid, with four solar panels, eight batteries on demand, a propane water heater, dorm-style fridge, LED lights and a compositing toilet, which uses peat moss and shavings and stays in a holding tray for three weeks.

“There are obvious benefits and we feel pretty good about our living,” Edge said. “We’re not using very much water, our electricity is solar powered and we use very little propane.”

Edge is proud of the sustainability of their trailer but cites other reasons for Tiny House living. “Both of us move around a lot,” said Edge. “We wanted to bring our house with us. The money thing was also a part of it. We didn’t want to throw our money away in an apartment for five more years.”

Baskett’s house is on a trailer with wheels, but he plans to buy land and put it on a foundation. To adhere to City of Flagstaff building codes, he will have to build an addition to comply with the minimum room size. Likewise, the Edges see their situation as temporary and would like to eventually buy land and build a 400-square-foot adobe house.

“Technically everyone living in Tiny Houses and travel trailers [is living illegally. It’s really frustrating,” says Edge. “There’s no way for you to permanently live in a Tiny House. You’re not supposed to stay in it.”

“The city does not specifically address ‘Tiny Houses’ in the zoning code,” said Daniel Folke, planning director for the City of Flagstaff. “The building code has minimum requirements for occupancy of a dwelling unit. Our building official estimates the smallest dwelling unit that would meet the housing code is around 290 square feet.

You can park and store an RV, trailer or camper on your single-family lot, but they must be behind the front setback (not in the front yard), and located in the side or rear yard,” added Folke.

But despite the building code restrictions, Baskett has a positive outlook on the future of Tiny Houses and changes made to accommodate them. “The Tiny Home movement is really new. It’s coming,” he said.

“Going abroad causes you to look at what you thought was valuable and really wasn’t,” Baskett said. “Seeing other lifestyles that weren’t orthodox and realizing they were perfectly happy caused me to look at the dynamics of my life and question them.”

Baskett spends much of his free time sculpting, reading and being outside. He says that living simply has left him more time for self-cultivation. Edge agrees that the benefits of downsizing have been worth it for them.

“We’re more careful about what food we get, less food wasted. We value the things we have more. We have fewer things but they’re much better quality,” explained Edge. “We appreciate each other as well. We went through this together.” FBN

There are a number of different literature and media sources that have information on building Tiny Houses. Here are some examples for your own inspiration.