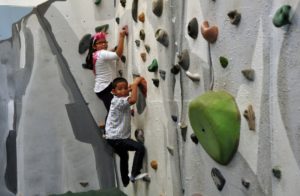 Andy and Raana Grieder believe in play. That is why they opened Cabin Fever in Flagstaff, which gives kids and even adults the opportunity to have fun while getting a little exercise.

They have created a space with a climbing wall, bouncy houses, an obstacle course, an indoor field to play sports and laser tag.

Andy says they want parents to feel good about having their children go to Cabin Fever instead of sending them to a place with only arcade games. But, they have those, too!

“I have to pay the rent, but we have fun with air hockey, a basketball shoot and a claw,” he said. “Laser tag is our anchor for sure.”

Local parent Carolynn Delany calls it a “one-stop fun stop” because there is something for everyone. “Our son likes laser tag and the climbing wall. We love the fact there are so many fun games for children as well as adults. We have done laser tag and tried the other games.”

Another thing she likes about it is that at the end there is “delicious pizza.”

Grieder said he thinks what sets Cabin Fever apart is that they don’t “nickel and dime” people. If someone signs up for Laser tag, they get to use the rest of the facility, which is included in the fee.

The business was opened in March 2016 and the Grieders say business is good.

The couple and their three children moved to Flagstaff from Pennsylvania about seven years ago when he transferred to W. L. Gore & Associates.

“When we moved here, we actually noticed the opportunity for child’s play was limited,” he said. “I have three kids and one day I woke up and decided I wanted to do something different, try something new, which seemed like an opportunity. It took a good year to write the business plan. I took classes and talked to other business owners.”

“They did a lot of building the place – painting and hammering – and giving me ideas about what they liked and didn’t like,” he said.

“That is one of my passions,” he said. FBN