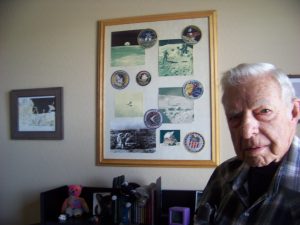 Inventor Bill Tinnin has global fan base; GROVER to be featured at Star Party.

While Neil Armstrong’s and Buzz Aldrin’s footsteps have been imprinted on the moon and in world history, the Moon Buggy they explored in left tracks on the lunar surface and also in the imaginations of the news media and fans. At 88, the Northern Arizona man who played a role in designing the buggy prototype continues to be tracked down by the news media and fans. Grover, or Geologic Rover, spends its days in retirement in the U.S. Geological Survey building in Flagstaff. Bill Tinnin, the inventor credited with inventing the moon buggy, is retired in Prescott Valley. The two have been connected since the 1960s Apollo moon missions.

Since the first moon landing on July 20, 1969, Tinnin has been contacted by people from 12 states and nine countries for his contributions to the NASA space program. He was never featured in international TV and press the way the first astronauts were, but Grover was.

Tinnin credits a story published three years ago in the Flagstaff Business News (FBN) and Quad Cities Business News (QCBN) with creating public awareness, especially in Central and Northern Arizona. “I had hundreds of people from just Arizona contact me. Some come visit me. They want to hear even more.”

The really big exposure happened when a television team from the Netherlands visited Flagstaff in June 2019 and read the FBN article. They contacted him at his Prescott Valley home, arranged to film a video and posted that video on YouTube. Shortly thereafter, Tinnin began receiving messages from viewers from around the world. He now has fans from coast to coast and border to border – Massachusetts to Washington and Oregon, and Texas to Wisconsin, and many states between.

International contacts range from the one with the Dutch in 2019 to a more recent one this fall with the Czech Republic. An especially intriguing handwritten letter was from a youngster, Sue Jennings, from Victoria, Australia, who said in part: “What an exciting life you led. You must be very clever to be involved in all the ground-breaking activities you have. Will you please autograph the enclosed photo and return it to me?”

Foreign contacts range from throughout Europe and the United Kingdom to Canada and the South Pacific.

For instance, Bill and his wife, Pam, encountered a British couple while on a vacation in Alaska in 2011. They have remained in regular contact since. The couple did some research about Tinnin and his connection to NASA and the U. S. Geological Survey (USGS) where Tinnin worked for decades. The Brits, both teachers and cinematographers, made a video focusing on Bill and Grover and shared it with organizations and groups and put it on travel blogs. That stimulated even more contacts from around the world. The couple visited and stayed with the Tinnins in April.

To be clear, Tinnin did not build the actual vehicles that roved the moon. He built the prototype that astronauts trained in from a wrecked truck and auto parts he scrounged from Flagstaff junkyards. He replaced the original wheels with four battery-driven electric wheels. He stripped an old umbrella frame, turned it inside out and used it as the antenna to send and receive radio signals from the spaceship and Earth.

Asked if he could build a lunar rover, Tinnin said, “Sure, why not?” At that time he was working at the USGS where he began work as a mechanic after being honorably discharged from the U.S. Air Force. Tinnin credits Eugene Shoemaker, a distinguished USGS geologist, with having the vision to realize astronauts would need more than foot power to roam a moonscape pockmarked by eons of space debris impacts. Shoemaker also realized the terrain around Flagstaff, with its many craters, lava flows and craggy ravines, would be an ideal location to train astronauts.

Shoemaker and fellow geologists, including the late Gordon Swann, dedicated years of their careers to train and educate astronauts about what they likely would encounter on the moon’s surface. Tinnin traveled with Swann to diverse terrains throughout Arizona and Nevada to train astronauts in Grover.

“I was one of the lucky ones,” Tinnin said. “I worked with every astronaut who walked on the moon. I have a framed wall display with mission patches and images given to me from every Apollo mission and I’m very proud of it. I’m proud of our team that made it happen – Rutledge ‘Putty’ Mills, Dick Wiser and Walt Fahey.”

Tinnin says he doesn’t have much contact now with the early astronauts and other NASA and USGS personnel. “Many of them are gone now. After all, it has been more than 50 years. But I have my memories, and I have people who still want to learn more. What else could I ask for?”

Tinnin’s achievements are documented in several publications, including “Lunar and Planetary Rovers,” by Anthony Young and “Northern Arizona Space Training,” by Kevin Schindler and William Sheehan. He is cited in dozens of USGS publications.

Guided tours to visit Grover and other USGS space exploration tools will be offered by the USGS at the free Flagstaff Star Party Field Day, 3-5 p.m., Thursday, Sept. 22, at Buffalo Park.

Being near CBS newsman Walter Cronkite when he said those now indelible words, “Man is on the Moon.”

Building something from scratch for an outer space exploration that had never before been attempted. Our technology then was very primitive.

Listening to a lot of country music.

All 20 astronauts who were sent to the Moon used the vehicles we built to train on the crater fields that surround Flagstaff.

When some of those astronauts returned to Flagstaff and shook our hands. We knew it [driving on the moon] had really happened. FBN