You are here: Home / Archives for neil armstrong 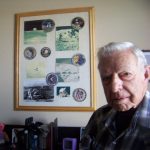 While Neil Armstrong’s and Buzz Aldrin’s footsteps have been imprinted on the moon and in world history, the Moon Buggy they explored in left tracks on the lunar surface and also in the imaginations of the news media and fans. At 88, the Northern Arizona man who played a role in designing the buggy … END_OF_DOCUMENT_TOKEN_TO_BE_REPLACED

Neil Armstrong’s passing reminded me of the moment I learned of his historic accomplishment. I didn’t gather with my family around the television to watch him take his “small step” onto the surface of the moon. When the momentous event occurred, I had no idea it was happening. I and several hundred … END_OF_DOCUMENT_TOKEN_TO_BE_REPLACED